Chelsea Clinton Allegedly the Cause of ‘High Turnover’ at Foundation

Chelsea Clinton Allegedly the Cause of ‘High Turnover’ at Foundation 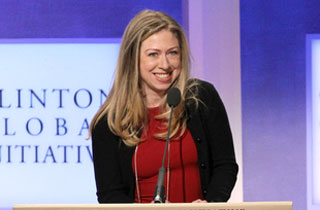 Oh look, here’s more negative news involving the Clinton Foundation. This time it involves Clinton heir apparent Chelsea, who, according to secret sources talking to Page Six, allegedly takes after her mother by being a generally tough person who drives people away from the foundation.

The anonymous sources told the paper that Clinton’s personality has resulted in “extremely high turnover” at the Foundation, either due to political machinations or low morale.

Onetime CEO Bruce Lindsey was pushed upstairs to the position of chairman of the board two years ago, so that Chelsea could bring in her McKinsey colleague Eric Braverman.

“He [Braverman] was her boy, but he tried to hire his own communications professional and actually tried to run the place. He didn’t understand that that wasn’t what he was supposed to be doing,” said my source. “He was pushed out.”

Matt McKenna was Chelsea’s spokesman, and then he wasn’t. Now he works for Uber. Ginny Ehrlich, the founding CEO of the Clinton Health Matters Initiative, now works for the Robert Wood Johnson Foundation.

But here’s where the gossip goes from workplace drama to 2016 implications: the unhappy insiders blame Chelsea’s inaccessibility and leadership style with turning the foundation, created by her father Bill Clinton, into a “a bloated slush fund.” Its donors are now the subject of intense scrutiny after the release of Clinton Cash, which alleges that Hillary Clinton used her position as Secretary of State to benefit countries who donated to the Foundation. (It got even hairier after revelations that George Stephanopoulos gave $75,000 to the Foundation and failed to disclose that information during his coverage of Clinton Cash.)