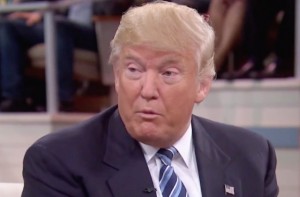 A prominent North Carolina civil rights organization said no to Donald Trump‘s request to visit, citing the demands his campaign made for special accommodations.

Trump recently held a campaign event in the state, and it was during this time that the International Civil Rights Center and Museum said they were contacted by Trump’s people about hosting them afterwards. Co-founder Earl Jones spoke about the exchange with WFMY News 2, where he said that the museum denied the request because Trump’s staff were rude to them and made demands like closing for at least five hours to accommodate the mogul.

“We did not honor the request of the Donald Trump team because we thought they demonstrated, in their approach was disrespectful,” Jones said. He went on to say that Trump’s request was an insincere attempt to “exploit the legacy” of civil rights leaders for political gain.

“The approach, the type of disrespect, pretty much a demand and bullying us to use the museum in their manner and their way in their time, it was inappropriate and I think it’s probably reflective of the type of insensitivity of civil rights and human rights that’s reflective from Trump over the years.”

While Jones said that Trump and Hillary Clinton are free to visit the museum at their leisure, neither candidate would get any special treatment from him.

Trump’s rhetoric towards various minorities groups have earned the ire of a significant number of people, and recent polls suggest that his African American outreach attempts haven’t changed things very much.

Watch above, via WFMY 2 News.