Colbert Secrets and Other Highlights from Jon Stewart’s Reddit AMA 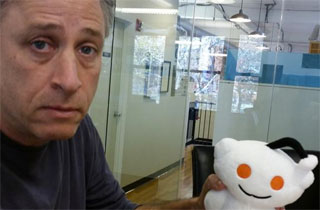 As part of his quest to promote his upcoming filme Rosewater, Jon Stewart did a Reddit AMA this afternoon. And naturally, because it was Reddit, many of the questions were about his ex-correspondent and Reddit God Stephen Colbert.

My greatest joys on the show were trying to make Stephen break, or the other correspondents. Because you felt as though you had accomplished something somewhat Herculean. It’s not easy to tickle those folks, but when it happens, you savor it.

And promising to hire Colbert if he ever became president:

I think the first thing I might do is photocopy my balls and send it to every teacher i had in high school.
THEN, onto the legislating.
My first presidential hire would have to be Colbert.
And I would pardon… oh wow… that’s a good one. I think I’m gonna have to check the list of pardon people.

Stephen smells like – it’s a cross between –
Squints into distance
Persimmons and a tattered copy of THE HOBBIT.

And speaking of true love:

Q: Will you and Bill O’rielly just kiss already? The sexual tension is palpable.

Right?
It’s really the height differential that keeps us from consummating.

But don’t worry, Jon has plenty of love for his other ex-correspondent-turned-TV-host, John Oliver:

To your larger point: I believe there is nothing that is not made more awesome when shot out of a cannon. And salmon is no exception.
It is an honor to be nailed by something that rich in Omega-3 fatty acids directly in the cabeza.