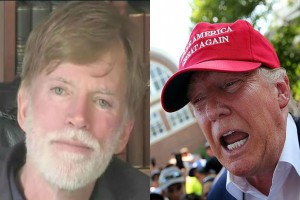 In one of a series of tweets published over the weekend, Duke said it was “ok” that Trump had replaced the image with the Star of David with one of a red circle, saying that “we welcome the hidden hand exposing itself.”

He also thanked Trump for “slipping some ‘Red Pills’ to the American people!” (“Red pill,” a term borrowed from The Matrix, typically refers to the men’s rights movement, but can be more broadly applied to any instance of one becoming aware of the secret nature of the world.)

The image Trump tweeted out appeared originaly on a message thread that trafficked in neo-Nazi and white supremacist memes (as Mic originally reported). Trump on Monday blamed the media for reporting on the tweet, affirming that the six-sided star was a sheriff’s star — a claim he and his supporters have stood by.

Duke has been one of Trump’s troublesome supporters, and the candidate invited controversy back in February when he did not immediately disavow the former KKK leader’s endorsement. (He eventually did.) Duke subsequently took credit for a boost in Trump’s poll numbers.