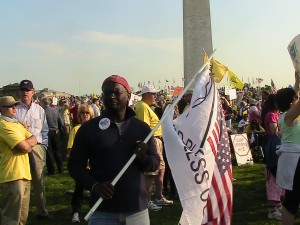 According to estimates by volunteers, between 10 and 20 thousand people gathered for yesterday’s Freedomworks Tax Day Tea Party event, and from what I saw, it was a rousing success (relatively speaking). The crowd was enthusiastic but well-behaved, and the organizers were vigilant in keeping out racially offensive signs.

There were still some offensive signs, and it’s a sign of a low bar that prevalent accusations of “socialism” are barely worth mentioning anymore, but for a movement whose image has been tarnished by highly-publicized ugliness, this was a very good day.

There were also counter-protesters, who also displayed varying degrees of productiveness. I’ll get to them later. First, though, check out my interview with Andre Harris, a black Tea Partier who summed up what a lot of the folks I talked to were saying.

The Tea Party movement has been dogged by accusations of a lack of diversity, particularly among black people, and both sides have grossly oversimplified this issue. Keith Olbermann has simply taken to calling Tea Parties “Klan meetings,” while one Tea Party Express organizer told CNN that black people would show up as soon as they read the Constitution.

I chose Andre’s interview because he echoed most of what the others told me, plus he was able to add some perspective to the race question.

By any measure, black people are grossly underrepresented at Tea Parties, a phenomenon which likely has something to do with the publicity surrounding racially charged incidents. Most Tea Partiers chalk up to bad apples, but maybe it’s also time for this movement, and it’s critics, to examine why their message just isn’t resonating with black Americans.