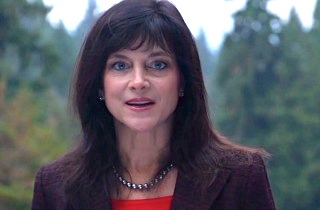 One week ago, Oregon Republicans celebrated the recruitment of a promising Senate candidate who is poised to win a crushing primary victory and likely face Sen. Jeff Merkley (D-OR) in November. Pediatric neurosurgeon Monica Wehby has run a strong primary race, has a compelling biography, and is moderate enough on social issues to appeal to a center-left Oregon electorate. After several cycles in which the Beaver State’s GOP mounted competitive but unsuccessful statewide campaigns, the party felt like they had finally found a winner.

Then, beginning on Friday, a cascade of reports began to emerge in political publications which suggested that Wehby has a manic history with the men in her life. Last week, Politico reported that a former boyfriend of Wehby’s, Andrew Miller, accused her of “stalking” him and “harassing” his employees last year. In a 911 call obtained by Politico, Miller threatened to file a restraining order against Wehby.

Those accusations were compounded on Monday when reports began to surface in Oregon news outlets that Wehby had instigated a physical confrontation with her ex-husband as their marriage crumbled. A police report from that altercation indicated that Wehby’s former ex-husband, Jim Grant, sported a “slight red dot” after being reportedly struck with a pad of paper. The episode of violence, both parties claim, was fueled by alcohol imbibed at a December 2007 Christmas party. In 2009, Grant again called the police on Wehby when she attempted to see the couple’s children and would not leave his home until she did.

The carefully crafted image of Wehby as a cogent and measured medical professional was shattered by the reports that cast her, instead, as an erratic, jilted lover prone to fits of violence. But there are some warning signs in these reports which should give gleeful Democratic partisans pause before attacking Wehby for being unstable.

Miller never filed a temporary restraining order -– a process that is not difficult to pursue and, unlike a final restraining order, does not require both parties appear before a judge before being granted. Furthermore, “Miller has said he regrets calling police in 2013, he and Wehby are now friends and he supports her campaign for Senate,” Oregon’s KXL reported. Similarly, the physical altercation between Wehby and her ex-husband, which preceded their divorce, also did not result in criminal or civil charges.

Finally, as The Oregonian reported, Politico likely received the tip on Miller’s altercation with Wehby from a research assistant with the Oregon Democratic Party. Aware that the party’s efforts to attack Wehby on personal grounds could backfire, Merkley has denied that he was aware of the effort to uncover his likely opponent’s police records and the state party has declined comment. Wehby’s campaign manager accused the Oregon Democratic Party of waging a “war on women.”

It’s a situation that should appear familiar to partisan conservatives who indulged in an ill-advised bit of schadenfreude when similar allegations of domestic violence were made against Rep. Alan Grayson (D-FL).

Also amid a messy divorce, Grayson’s estranged wife accused him of physical assault in March. Armed with images that she insisted proved her claims, Lolita Carson-Grayson accused her husband of slapping her in the face and kneeing her in the stomach. Claiming that this was not the first violent episode, she pursued and received a temporary restraining order against Grayson. The Florida congressman denied the charge against him but, as so often is the case with allegations of domestic violence, the burden of proof fell on the accused.

But conservatives who pounced on the charges against the Democratic bomb-thrower ignored the red flags in Grayson’s wife’s allegations, the most glaring of which was that Grayson was never charged criminally in any of the alleged attacks. The congressman later produced the audio of a 911 call and photographic evidence which exonerated him. Within days, Carson-Grayson announced she would drop the restraining order against her husband and pursue reconciliation. Grayson, for his part, accused his wife of bigamy and sought to have his marriage annulled on those grounds.

The Grayson saga was personal, bitter, and lamentably public. Wehby’s personal problems, too, are now public. The distinction between these two cases is, however, that Republicans did not seek to discredit Grayson by digging up his personal issues with his wife. The Oregon Democratic Party has, however, endeavored to tar Wehby by digging up police records regarding domestic incidents which cast her in an unfavorable light.

It is certain that the nation’s campus feminists could easily append the word “shaming” to the treatment Wehby has endured at the hands of Democrats. The effort to discredit women professionally by bringing up their personal issues, we are so often told, is supposedly a subtle and insidious form of misogyny. While Wehby’s personal issues may not be off limits in the context of a political campaign, a similar incident Grayson faced suggests they should be taken with a grain of salt for now.

What this episode demonstrates definitively, however, is that the Democratic Party’s image as protector of the dignity of modern, professional women is easily abandoned when the woman in question is a Republican.

[Image via Monica for Oregon]