Adam Carolla: No Problem with Gay People, ‘They’ve Just Turned into a Mafia’ 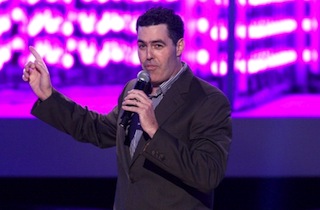 Former Loveline co-host Adam Carolla told Salon’s Daniel D’Addario that he had no problem with gay people, just felt that it was impossible to succeed in Hollywood without kowtowing to them because they’re basically a mafia.

The comments came in response to a 2011 joke that got Carolla in trouble with the LGBT community.

“You can’t live in Hollywood and get along in this business and be in theater companies and improv companies and have issues with gay people,” Carolla said. “If you can’t work with gay people, you’re gonna have a difficult time in Hollywood. There’s plenty of gay people and they’re in positions above you. You’re not going to get your movie directed. I don’t have a problem with it — they’ve just turned into a mafia and demanding everyone apologize for every joke and retract every statement.”

RELATED: Adam Carolla Tells Kimmel What He Would Do if He Were President

Carolla in general felt that the culture had become oversensetive toward comedians, who offend by profession.

“Every year Variety or the Hollywood Reporter or one of those magazines comes out with a list of celebrities or notables that hate the gay community,” Carolla said. “I was on that list, because in 2011 I made a joke about Chaz Bono. Jesus Christ, if you can’t joke about Chaz Bono, then we’re all through! They had Tracy Morgan, several of the people on the list were comedians. And when did this start up? They’re comedians, onstage, making jokes! They may mean it half the time, but they’re still making jokes, why are they held to the same standard as statesmen?”