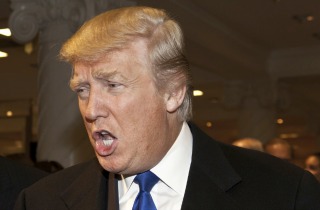 Donald Trump has released yet another statement––this one incredibly long––insisting that everything he said about Mexican immigrant criminals is spot-on and there’s no “room for misunderstanding or misinterpretation” on what he said.

Despite criticism from GOP rivals, Trump isn’t backing down from his comments about how Mexico is “forcing” their undesirables into the United States, saying now that “tremendous infectious disease is pouring across the border.”

Trump went after the media for “distorting” what he said and, of course, also used the occasion to rail against all the companies distancing themselves from him, declaring they’ve “all taken the weak and very sad position of being politically correct even though they are wrong in terms of what is good for our country.”

He also invoked Univision’s recently-announced plan to go public and bragged about how there were “many rave ‘reviews'” of his Mexico remarks at the time.

But, of course, presenting Trump in anything other than complete context would be a disservice, so here’s The Donald’s full statement:

I don’t see how there is any room for misunderstanding or misinterpretation of the statement I made on June 16th during my Presidential announcement speech. Here is what I said, and yet this statement is deliberately distorted by the media:

“When Mexico (meaning the Mexican Government) sends its people, they’re not sending their best. They’re not sending you (pointing to the audience). They’re not sending you (pointing again). They’re sending people that have lots of problems, and they’re bringing those problems to us. They’re bringing drugs.They’re bringing crime. They’re rapists. And some, I assume, are good people! But I speak to border guards and they tell us what we’re getting. And it only makes common sense. They’re sending us not the right people. It’s coming from more than Mexico. It’s coming from all over South and Latin America, and it’s coming probably from the Middle East. But we don’t know. Because we have no protection and we have no competence, we don’t know what’s happening. And it’s got to stop and it’s got to stop fast.”

What can be simpler or more accurately stated? The Mexican Government is forcing their most unwanted people into the United States. They are, in many cases, criminals, drug dealers, rapists, etc. This was evident just this week when, as an example, a young woman in San Francisco was viciously killed by a 5 time deported Mexican with a long criminal record, who was forced back into the United States because they didn’t want him in Mexico. This is merely one of thousands of similar incidents throughout the United States. In other words, the worst elements in Mexico are being pushed into the United States by the Mexican government. The largest suppliers of heroin, cocaine and other illicit drugs are Mexican cartels that arrange to have Mexican immigrants trying to cross the borders and smuggle in the drugs. The Border Patrol knows this. Likewise, tremendous infectious disease is pouring across the border. The United States has become a dumping ground for Mexico and, in fact, for many other parts of the world. On the other hand, many fabulous people come in from Mexico and our country is better for it. But these people are here legally, and are severely hurt by those coming in illegally. I am proud to say that I know many hard working Mexicans—many of them are working for and with me…and, just like our country, my organization is better for it.

The Mexican Government wants an open border as long as it’s a ONE WAY open border into the United States. Not only are they killing us at the border, but they are killing us on trade … and the country of Mexico is making billions of dollars in doing so.

I have great respect for Mexico and love their people and their peoples’ great spirit. The problem is, however, that their leaders are far smarter, more cunning, and better negotiators than ours. To the citizens of the United States, who I will represent far better than anyone else as President, the Mexican government is not our friend…and why should they be when the relationship is totally one sided in their favor on both illegal immigration and trade. I have pointed this out during my speeches and it is something Mexico doesn’t want me to say. In actuality, it was only after my significant rise in the polls that Univision, previously my friend, went ballistic. I believe that my examples of bad trade deals for the United States was of even more concern to the Mexican government than my talk of border security.

I have lost a lot during this Presidential run defending the people of the United States. I have always heard that it is very hard for a successful person to run for President. Macy’s, NBC, Serta and NASCAR have all taken the weak and very sad position of being politically correct even though they are wrong in terms of what is good for our country. Univision, because 70% of their business comes from Mexico, in my opinion, is being dictated to by the Mexican Government. The last thing Mexico wants is Donald Trump as President in that I will make great trade deals for the United States and will have an impenetrable border–only legally approved people will come through easily.

Interestingly, Univision has just announced they are attempting to go public despite very poor and even negative earnings, which is not a good situation for a successful IPO or high stock price—not to mention that I am currently suing them for breach of contract. Remember, Univision is the one who began this charade in the first place, and they are owned by one of Hillary Clinton’s biggest backers. After the speech was made, there were numerous compliments and indeed, many rave “reviews”—there was very little criticism. It wasn’t until a week after my announcement that people started to totally distort these very easy to understand words. If there was something stated incorrectly, it would have been brought up immediately and with great enthusiasm.

The issues I have addressed, and continue to address, are vital steps to Make America Great Again! Additionally, I would be the best jobs President that God ever created. Let’s get to work!