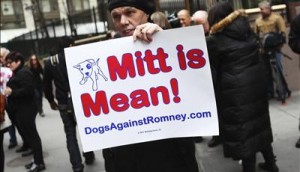 The founder of the grassroots organization Dogs Against Romney called the Romney campaign “desperate” for dredging up the revelations that President Obama ate dog meat as a child in Indonesia.

“It seems desperate for the Romney campaign to bring up something that happened to Obama when he was 10 years old, not preparing his own meals, in a country where eating dog meat probably isn’t all that unusual as if it compares in any way to Romney, as a 36-year old adult, in America, making the conscious decision to strap his family pet to the roof of a car for a 12-hour drive, and leaving it up there even after it got sick.”

Scott Crider, who writes his site in the voice of a dog, Rusty, said Romney was “desperate to divert attention from what Romney did.”

“If President Obama had made the conscious decision to eat dog meat as a 36-year old adult, in America, claimed the dog liked being eaten, and still claimed he didn’t think there was anything wrong with it, the Romney campaign would have a point and my pack would be on the president like a pack of wild, well….dogs,” Crider wrote. “But that isn’t what happened.”

Crider started Dogs Against Romney after reading that Romney forced his Irish Setter Seamus to ride on a crate on the roof of his car in 1983 and organized a rally protesting Romney’s alleged dog abuse in front of the Westminster Dog Show in February.