The mainstream media has been buzzing all day about what a huge political victory Republican presidential candidate Donald Trump scored with his “presidential” and “strong” visit to Mexico, and subsequent joint press conference with Mexican President Enrique Peña Nieto. The liberal blogosphere has also been abuzz about Trump’s joint presser, but not in quite such a kind fashion, noting that Trump appears to have used bobby pins to keep his famous combover in place. Apparently, several Twitter users noticed Trump’s little helpers during the presser, and tweeted out still frames.

Here’s some close-up video from that presser, in which the hairpins can clearly be seen:

Here’s a still-frame from that video, so you can see it better: 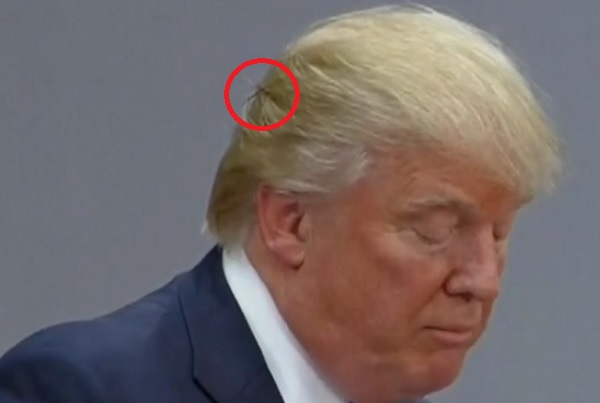 Trump has often made a show of proving that his hair is real, that it is his own, but even casual Trump observers can see that his unusual coif doesn’t bespeak a hairpiece, but a hairdo combed with the skill of a Jedi to give the appearance of a full head of hair. Now, you can all start poring over old Trump videos looking for bobby pins.