THE RIGHT TO BEAR ARMS 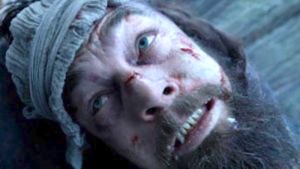 Academy Award-nominee Leonardo DiCaprio’s newest film, The Revenant, supposedly involves a scene in which his character is raped by a bear. Twitter got wind of this on Tuesday and decided to quit everything else.

The unwanted-but-free press extravaganza for director Alejandro González Iñárritu‘s next began when Internet media hound Matt Drudge posted a rare tweet to his personal account about the story.

The report itself is, erm, “interesting.”

The explicit moment from Oscar winning director Alejandro Inarritu has caused maximum controversy in early screenings. Some in the audience escaped to the exits when the Wolf of Wall Street met the Grizzly of Yellowstone.

The story of rural survivalism and revenge reaches new violent levels for a mainstream film.

Needless to say, Twitter’s collective response to the rumored scene is everything we love and hate about the Internet.

"There is a bear in the woods. For some people, the bear is easy to see…"

Is it possible that Drudge took "bear" as in a large, bearded gay man to mean a literal bear?

I wish I had a dollar for every time an Oscar campaign resorted to the old trick of "A bear raped Leonardo DiCaprio."

surprised how solid Drudge Bear Twitter is. A+ work everyone, let's get back to work.

Do I want to know what the bear thing is about?

"DiCaprio Raped By Bear In Fox Movie" Folks, this time the Happy Tree Friends have gone too far

Seriously, how long until the first “rape jokes aren’t funny even when they’re about bear rape” essay at Salon? https://t.co/E1E3n2sITe

Salon: "I'm a bear-lover, but RWNJs are the real monsters." Atlantic: "Can bears have it all?" TNR: "America's history of anti-bear animus."

Study: one out of every 30 DiCaprio performances is raped by a bear pic.twitter.com/kqUnbcnmQE

Jesus Christ. Step away from Twitter for ONE minute and Leonardo DiCaprio get’s raped by a bear.

I thought Andy Serkis was tremendous as the bear in THE REVENANT.

We all know where this is heading.

UPDATE–2:18 p.m. ET: According to Death and Taxes, DiCaprio is not raped by a bear in The Revenant. Sorry about the Oscar, Leo.