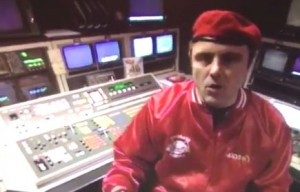 Republican presidential candidate Donald Trump revealed new proof for his continued assertion that thousands of Muslims in nearby New Jersey cheered when the World Trade Center was attacked on Sept. 11, 2001.

Since the support of former New York City Mayor Rudy Giuliani and Fox & Friends‘ co-host Steve Doocy wasn’t enough, Trump decided to cite Fred Siegel‘s Sept. 14, 2001 op-ed in the New York Post, “The Issue Is Radical Islam.” He specifically highlighted a passage in which the author wrote that “it was easy to get angry listening to Egyptians, Palestinians and the Arabs of nearby Paterson, N.J., celebrate as they received word of the murderous attacks in New York and Washington.”

Look at the editorial I was just sent from the NY Post on 9/14/01 – 3 days after collapse of WTC. Any apologies? pic.twitter.com/b6DKEOk8Px

However, Siegel’s op-ed doesn’t quote or reference any specific evidence for the supposed cheers. Nor does it mention the thousands of people cheering the streets that Trump has repeatedly claimed to have seen.

So the New York real estate mogul followed up that tweet with a video of Guardian Angels founder Curtis Sliwa, a media personality in NYC who hosts his own daily radio show. According to Trump, the video — which shows Sliwa talking about the cheers when the WTC came down — was filmed on Sept. 13, 2001.

Efforts to find Trump’s original source, as his tweeted video is video of a video, or corroborate his claims about the filming date, have proven unsuccessful.

However, Sliwa’s name came up in a Newark Star-Ledger story from Sept. 23, 2001, in which he claimed several Arab-Americans in the area were cheering on Sept. 11, but not in the numbers suggested by Trump. In addition, they were mostly kids.

“They got put in their place by the elders — they were clobbered,” Sliwa said. “The reaction of the community as a whole, that’s really the story they should tell instead of this complete denial. There are a lot of American flags flying down there now.”

Sliwa has yet to respond to Trump on Twitter, though the 77WABC radio host might mention the name drop during his daily radio show from 12 noon to 3 p.m.

UPDATE–12:24 p.m. ET: Sliwa responded to Trump and Mediaite on Twitter, saying that he would address the clip and his comments on his radio show, Curtis and Kuby.

No apology, @realDonaldTrump. Callers to @curtisandkuby on 9-11 said they saw 12 teens celebrating in Paterson.https://t.co/6h6VNIZZMG

Thanks @realDonaldTrump for the trip down memory lane. I was saying there were a handful of people. Clip is edited. https://t.co/PnqhCv8zvV