Evangelist Suspects Megyn Kelly Is Being ‘Blinded’ by Satan
video

Evangelist Suspects Megyn Kelly Is Being ‘Blinded’ by Satan 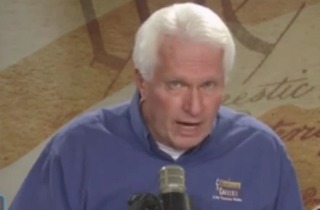 Evangelist Bryan Fischer doesn’t often criticize the people at Fox News, but when he does, it’s quite something. Case in point, saying on his radio show today that Megyn Kelly is basically being blinded by Satan.

Earlier this week, Kelly grilled Louisiana Governor Bobby Jindal on his call for keep Muslims who want to “impose some variant of Sharia law” out of the United States by altering immigration law. Kelly told Jindal that seems to go against the very idea of America, asking, “Are we going to start banning everybody who doesn’t treat women or children or criminals for that matter the way we like?”

In a moment excerpted by Right Wing Watch, a caller to Fischer’s show was incredibly troubled by how resistant Kelly was to Jindal’s proposal. Fischer found it “alarming” that someone “as bright and capable and influential” as Kelly would be led astray and not understand the danger Islamic immigration poses for the United States.

He went on to say this kind of thing happens because of Satan, who possesses the power to fool and deceive people. So, Fischer said, when people wonder how someone like Kelly can not see the danger, it’s because “they are being subject to a blindness and they are not even aware that their eyes have been blinded.”

And you can watch Kelly taking on Jindal here, via Fox News: