One of the biggest names to back the social media campaign was actress Reese Witherspoon, who posted this message on Instagram: 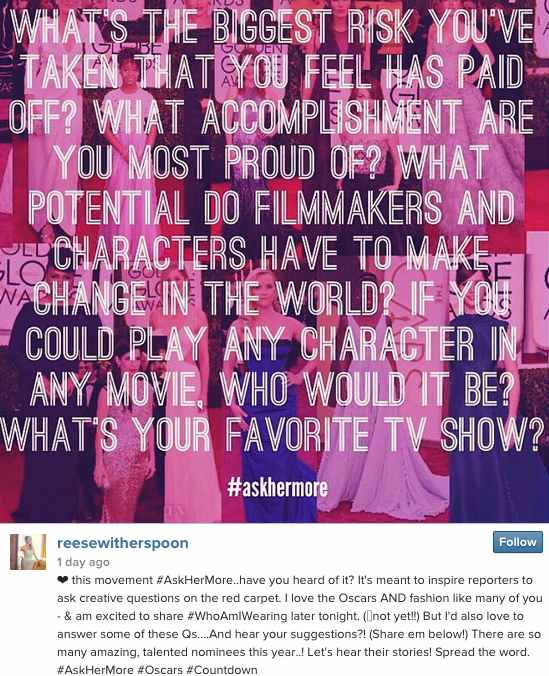 Witherspoon also addressed the campaign on the red carpet. You can watch here, via ABC:

Other female celebs showed their support too:

My friend Nadine said red carpet reporters should change the line "What are you wearing?" to "What do you care about?" #AskHerMore

Stop asking women questions about what they wear to cover the containers they carry their brains around in. #AskHerMore

Ask her about the causes she supports, not her support garments #oscars #AskHerMore: http://t.co/RdjPR3k6pB

This is how an E! executive producer addressed the issue:

“When it comes to E!, I think the charge is off the mark,” he told THR when asked about his response to the #AskHerMore campaign. He said that if E! spends “more than a moment on people’s outfits” it’s because the person that is being interviewed wants to.

“It’s the first thing that we talk about because it’s natural to say to someone, ‘You look lovely, tell me about your outfit,’ and I do think the stars welcome that. Generally we go to questions about projects they have, who they are with, what they expect tonight — a whole range of issues that have been researched across the entire awards season, and that’s what the interview is about.”