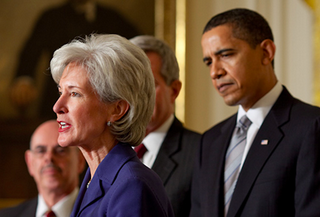 At 3:30pm ET Wednesday, Secretary of Health and Human Services Kathleen Sebelius released the highly-anticipated, first official insurance enrollment numbers since the Affordable Care Act went into effect on October 1st. According to Sebelius, 106,185 people enrolled in both the state and federal marketplaces. Of those, only 26,794 signed up through HealthCare.gov, which covers the 36 states not operating their own state-based exchanges.

Expectations were low followed a widely-cited report from the Wall Street Journal that estimated 40,000 to 50,000 enrollees as of last week, or “far short” of the goal set by the Obama Administration. Officials have been cautioning that the initial numbers would be lower than expected due to the ongoing problems with the HealthCare.gov portal.

As the Washington Post’s Sarah Kliff reported yesterday, the administration had initially estimated that 500,000 people would sign up under the law by the end of October. But according to sources with access to the figures, the real number of people who have signed up for private plans using both state-based marketplaces and HealthCare.gov is closer to 90,000.

In additional to the numbers above, the Department of Health and Human Services announced that 396,261 people have been ruled eligible for coverage under the expanded government-run Medicaid and Children’s Health Insurance Program.

Here’s the full press release, from the Department of Health and Human Services:

Detailing results of the first reporting period (Oct. 1-Nov. 2, 2013) of the Health Insurance Marketplace’s Open Enrollment, Health and Human Services (HHS) Secretary Kathleen Sebelius announced today that 106,185 individuals have selected plans from the Marketplace, and another 975,407 have made it through the process by applying and receiving an eligibility determination, but have not yet selected a plan. An additional 396,261 have been determined or assessed eligible for Medicaid or the Children’s Health Insurance Program (CHIP).

“The promise of quality affordable coverage is increasingly becoming reality for this first wave of applicants to the Health Insurance Marketplaces,” Secretary Sebelius said. “There is no doubt the level of interest is strong. We expect enrollment will grow substantially throughout the next five months, mirroring the pattern that Massachusetts experienced. We also expect that the numbers will grow as the website, HealthCare.gov, continues to make steady improvements.”

The following key findings are among many newly available data reported today in an issue brief from HHS that highlights national and state-level enrollment-related information:

502,466 Americans, in just the first month of implementation, are positioned to have health coverage in 2014;
Of those, 106,185 Americans have selected plans from the state and federal Marketplaces; and
396,261 Americans have been determined or assessed eligible for Medicaid or CHIP;
975,407 have made it through the process by applying and receiving an eligibility determination and have not yet selected a plan.
Today’s report includes breakouts of enrollment-related data by state, including each of the 50 states and the District of Columbia. The report groups the states into the Federally-facilitated Marketplace (FFM) (defined as those states where HHS is running the Marketplace or states where HHS is doing so in partnership), and state-based Marketplaces (SBMs). In some cases only a partial SBM dataset was available.

In total, 106,185 Americans selected a Qualified Health Plan (QHP) through the Marketplace during the first reporting period of Open Enrollment. Enrollment figures include those who have selected a plan and have or have not yet paid the first month’s premium. Of the people who have selected a plan, 79,391 (74.8 percent) enrolled though a SBM, while the other 26,794 people (25.2 percent) enrolled through the FFM. Additionally, 396,261 Americans have been assessed or determined eligible for Medicaid or CHIP. SBMs that provided data for the report accounted for 212,865 (53.7 percent) of those determinations, while the FFM accounted for 183,396 (46.3 percent) of them. Forthcoming data will enumerate those who applied directly to a state Medicaid/CHIP office.