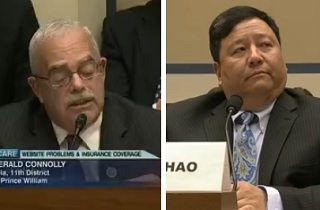 Having already earned a spot as an early adopter of misleading Obamacare horror stories, CBS News has been busted again over a report by Sharyl Attkisson that claimed there were security risks in the Healthcare.gov website that could lead to “identity theft among people buying insurance.”

The CBS News report, based on “a partial transcript of” testimony from CMS official Henry Chao‘s “nine hours of closed-door testimony to the House Oversight Committee,” purported to reveal that “the project manager (Chao) in charge of building the federal health care website was apparently kept in the dark about serious failures in the website’s security. Those failures could lead to identity theft among buying insurance.”

When asked about the report at Tuesday’s White House briefing, Jay Carney responded “I think you are elliptically referring to the selectively released memo to CBS that — by the committee, in the habit that it tends to embrace, which had to do with portions of the website that are not and will not be operative until the spring.”

But as The Washington Post‘s Erik Wemple points out, that CBS story got an even more thorough debunking at today’s Congressional hearing:

In a hearing of the House oversight and government reform committee today, Attkisson’s story received something of a public fact-check. Rep. Gerald Connolly, apparently rankled by the CBS News piece, launched a series of pointed questions at Chao. The short take from the exchange is this: The CBS News report looks completely misleading. Here’s a selective summary of what Connolly discussed with Chao:

Connolly: Correct that Republicans presented you with a document you hadn’t seen before? Chao: Correct.

Connolly: Correct that the document indicated that there were two “open high-risk” findings in Obamacare exchange? Chao: Correct.

Connolly: Correct that someone leaked parts of your transcript to CBS News? Chao: “It seems that way.”

Connolly: Correct that neither of those modules is active at this point? Chao: Correct.

Connolly: Correct that the Sept. 3 memo did not apply to the Obamacare marketplace? Chao: Correct.

Connolly: Correct that modules do not contain any personally identifiable information on consumers? Chao: Correct.

“So when CBS Evening News ran its report based on a leak, presumably from the [Republican] staff, but we don’t know — of a partial transcript — excerpts from a partial transcript — they said the security issues raised in the document, and I quote, ‘could lead to identity theft among buying insurance,’ that cannot be true based on what we established in our back and forth. Is that correct?”

Chao replied: “That’s correct. I think there was some rearrangement of the words I used during the testimony and how it was portrayed.”

This isn’t the first time that Sharyl Attkisson has fallen for a selective leak from Republicans, nor the first time House Republicans have selectively leaked transcripts of closed-door testimony. Given their other recent troubles, this ought to be the last time the CBS News eye blinks for something like this.