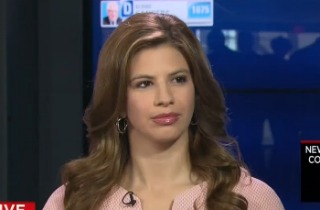 In a jump across the complete spectrum of American politics, conservative reporter Michelle Fields has been hired by Huffington Post as their newest reporter to cover Donald Trump‘s campaign.

CNN Money broke the news on Sunday night, confirming that Fields will start working for the left-leaning outlet. A stark contrast from her last employer —  the conservative website Breitbart.com.

“After the tumultuous events of the last few months, I am ready to get back to writing and reporting on what is without question the most bizarrely fascinating presidential race of my lifetime (and, perhaps, any lifetime),” Fields said. “[I am] beyond excited to join one of the biggest names in political journalism.”

Fields’ transition is likely to hold considerable implications for the Trump campaign coverage. Her name alone has been a source of headlines and controversy for the past few months. Fields accused Trump’s campaign manager Corey Lewandowski of assaulting her as she tried to ask the mogul a question, and the incident evolved into a major political firestorm for weeks.

Though the charges have been dropped against Lewandowski, Fields stands by her assertions that the campaign launched a deliberate smear campaign against her journalistic credibility.

Field’s career move is also noteworthy considering the extent of political difference between Breitbart and The Huffington Post. Fields resigned from Breitbart along with several colleagues when the site’s management refused to defend her, and the organization is still thought to be firmly supportive of Trump. On the other hand, Huffington Post has been slamming Trump’s controversial campaign since the beginning, and their articles about him still include a footnote about how he is “liar,” and a “racist” among other things.