FourSquare Has Its First Million-Checkin Day – And Then Its Second

Foursquare reached a milestone this weekend – twice. On Friday, the location-based social network hit one million “checkins” from users in a single day — then followed-up on Saturday with its second million-checkin day.

“Big milestone for @foursquare yesterday: over 1M checkins in a single day. POW!” tweeted Foursquare Engineering Lead Harry Heymann on Saturday. Heymann confirmed to me that the million-checkin milestone was repeated on Saturday as well. (No word yet on yesterday’s data for the actual 4th of July, or whether that data may have been affected by a collective food coma.)

In late May, Mashable did the math and determined that a million-checkin day breaks down to 11.58 checkins per second (at that time Foursquare had just broken the 10-checkins-per-second barrier – or, per mashable, 864,00 per day). 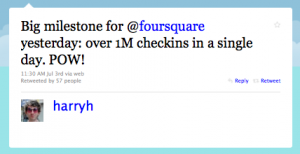 This is yet another milestone for the still-young company, which, at the sixteen-month mark, just raised a cool $20 million in its second round of funding. Foursquare hit a million users in April, and is adding approximately 15,000 users per day. The core of that user base is driving Foursquare activity; Heymann estimated that the users generating the weekend’s million-checkin days numbered between 300,000 and 400,000.

At a macro level, over 4.6B people have mobile phones and there are 1.7B people on the Internet. Already, over 200M people worldwide have smart phones and that number is headed north fast. Foursquare might not win the entire smart phone market (some people don’t even like to leave their house), but it will capture a huge portion of it because it’s incredibly fun and addicting.

As a Foursquare user (and — disclosure — Foursquare friend) I can vouch for the fun and addicting part. And that’s with just social incentives to check in. I have not yet gotten anything free from using Foursquare, but if I’d wanted a dry topping yesterday at Emack & Bolio’s, I would have. As soon as that translates to clothes I’m in serious trouble.