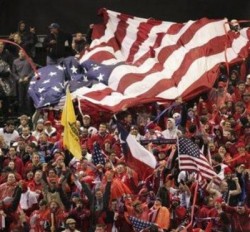 Every time the World Cup roles around soccer aficionados in the Unites States hope this will be the years soccer goes mainstream in America. In the 16 years since New York City hosted the World Cup the nation has been making baby steps towards that end, and the numbers this year are certainly encouraging — more people watched than watched “the Kentucky Derby or the final round of the Masters golf tournament or the Daytona 500, the jewel in NASCAR’s crown.” Surprised? Probably not if you were one of the millions of people that has caused almost every World Cup game to show up on Google trends.

This news however, may not be reassuring to some on the American political right who apparently hate soccer. In this week’s New Yorker Hendrik Hertzberg examines the phenomenon, and namechecks Glenn Beck (in what I think marks his second appearance in the New Yorker). Here is the short version: Because nothing in this country can currently be popular without being politically polarized the right has concluded only Socialists like soccer, and if the U.S. becomes a nation of soccer fans it’s because President Obama is secretly a socialist. Here’s Hertzberg’s version:

Back in 1986, Jack Kemp, the former Buffalo Bills quarterback turned Republican congressman, took the House floor to oppose a resolution supporting America’s (ultimately successful) bid to host the 1994 World Cup. Our football, he declared, embodies “democratic capitalism”; their football is “European socialist.” Kemp, though, was kidding; he was sending himself up. Today’s conservative soccer scolds are not so good-natured.

Their complaints are variations on the theme of un-Americanness. “I hate it so much, probably because the rest of the world likes it so much,” Glenn Beck, the Fox News star, proclaimed. (Also, “Barack Obama’s policies are the World Cup.”) What really bugs “silly leftist critics,” the Washington Times editorialized, is that “the most popular sports in America—football, baseball, and basketball—originated here in the Land of the Free.” At the Web site of the American Enterprise Institute, the Washington Post columnist Marc Thiessen, formerly a speechwriter for George W. Bush, wrote, “Soccer is a socialist sport.” Also, “Soccer is collectivist.” Also, “Perhaps in the age of President Obama, soccer will finally catch on in America. But I suspect that socializing Americans’ taste in sports may be a tougher task than socializing our healthcare system.”