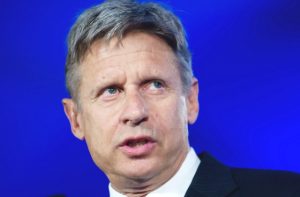 After his past gaffes of not knowing what Aleppo was or being able to name a foreign leader he likes, Johnson was asked by the Times about North Korea’s leader. This is what happened next:

In the Times interview on Wednesday, Mr. Johnson conspicuously sought to avoid another misstep. Asked if he knew the name of North Korea’s leader, Mr. Johnson replied, “I do.”

“You want me to name” the person, he said, then paused, before adding dryly, “Really.” But he declined to supply the name.

In addition to that, Johnson also said he sees a moral equivalence between U.S. killings overseas and what is being carried out under the brutal Syrian regime.

Johnson sarcastically said, “We’re so much better when in Afghanistan, we bomb the hospital and 60 people are killed in the hospital.”

He also complained about how Hillary Clinton gets credit because she “can dot the i’s and cross the t’s on geographic leaders, of the names of foreign leaders.”

These answers did not inspire much confidence on Twitter:

You know who else is deplorable? Gary Johnson. https://t.co/ZkuwwLG8kZ

Gary Johnson is officially off the list. My god. https://t.co/7bZOBKv4nW

it's like gary johnson wants to out-uninform trump. never know, it just might be the right strategy to win this! https://t.co/txM5JLY1l7

You can read the full Times interview here.