Gary Johnson Responds to Critics: Hasn’t Trump Said 150 Things That Should Be Disqualifying? 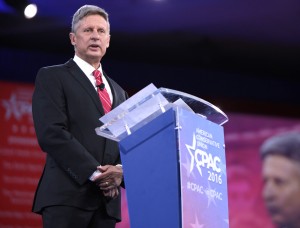 Libertarian candidate Gary Johnson fired back Friday morning against critics that have been lambasting him for his “What is Aleppo?” gaffe Thursday morning, reminding voters that Donald Trump has “said 150 things that should be disqualifying.”

Speaking to Connell McShane on Imus in the Morning Friday, Johnson took another stab at the Aleppo question, attempting to demonstrate his knowledge of the Syrian conflict and the various factions in play. “No one wants to stand by and watch a genocide occur,” he said, but he maintained that he believed America-led “regime change” never ended well.

“There is an incredible double standard going on here, and I’m okay with that. It’s the way that it should be,” he said. Asked to elaborate, he said, “Has Donald Trump not said 150 things that should disqualify? If this is one thing, hasn’t he said 150 of those things?”

He pointed to Trump’s proposal to deport 11 million (on which Trump has waffled, lately), a proposal that was “rooted in untruth and misfact [sic],” Johnson said. “This is a political boogeyman that does not exist. They are not taking jobs that U.S. citizens want.”

In the case of his Aleppo flub, Johnson said he had drawn a blank momentarily and immediately worked to correct himself. Trump, by contrast, willfully repeated lies and mistruths over and over again even after the facts had come to light. “When I find myself up against fact check and I find myself wrong, Connell, I change that tomorrow because I don’t want to be saying anything wrong.”

Speaking to the hosts of The View a few hours after his gaffe, Johnson had said, “For those that believe this is a disqualifier, so be it.” But on Friday morning, he said, “If this ends up to be a disqualifier, um, you know what…” and trailed off with a laugh.