Of all of Gawker’s journalistic sins, this may be the worst: forcing me to defend Donald Trump.

If a recent headline and story from Gawker is to be believed (sorry, no link), Trump recently embraced the anti-Semitic Twitter hate mob that went after a Jewish writer who wrote a story that was less than flattering towards his wife. 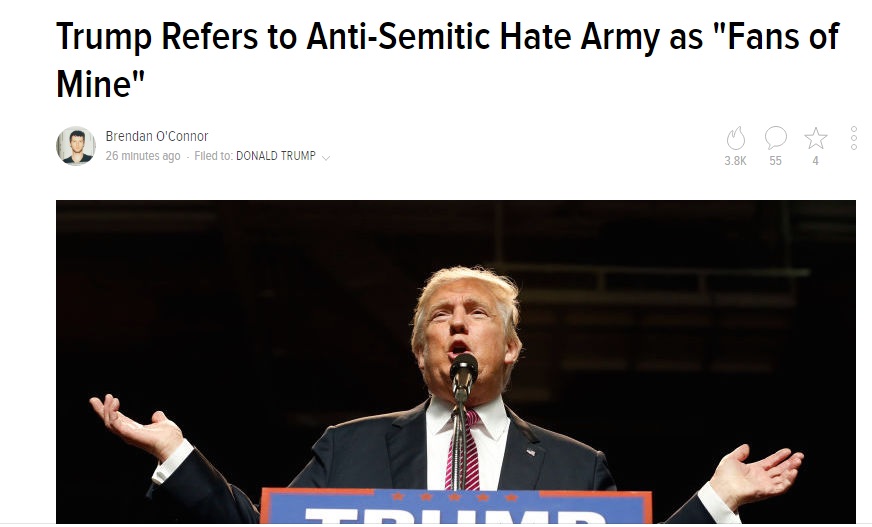 Late last month, GQ magazine published a profile of Melania Trump. The story was written by Julia Ioffe, who has subsequently been inundated with anti-Semitic death threats from Donald Trump supporters. Or as Trump calls them, fans.

Wait a minute, what? That doesn’t sound like Trump is embracing his anti-Semitic fans at all. On the contrary, it sounds like he’s denying any knowledge of the entire affair. At the very least this is making a mountain out of a molehill, but right of the bat it seems downright deceptive.

Here’s the full exchange in question:

BLITZER: Supposed fans of yours–

TRUMP: I know nothing about it. You’d have to talk to them about it.

I think it’s exceedingly clear that Trump was asking whether or not the anti-Semitic trolls were fans of his, not “referring” to them as his fans as the headline claims. In the clip, he sounds downright incredulous when he asks, “You mean fans of mine?” He goes on to say “I don’t know, maybe,” again, expressing doubt that they were actually his fans.

So yeah, Gawker managed to take a clip of Donald Trump denying that anti-Semitic lowlifes were his fans, and turn it into a story about how he’s embracing them as his fans. That’s unforgivable, no matter who the subject is.

I’d be angry if this was any politician, but this decision is just baffling. I mean, is there really such a dearth of terrible Donald Trump quotes that we need to start twisting his words for clickbait? He goes on in the same interview to decline to condemn the death threats. Boom, there’s your headline.

To the Trump haters in and out of the media: this is exactly what you need to avoid. Trump supporters claim they aren’t getting a fair shake and that the worst of Trump’s excesses are just elaborate media conspiracies. You aren’t doing yourself any favors by actually fabricating stories about him, you’re just giving people an excuse to ignore your legitimate complaints down the road.