Wait, What?: Katrina Pierson Nonsensically Attacks Romney for Being ‘Pro-Adoption’ 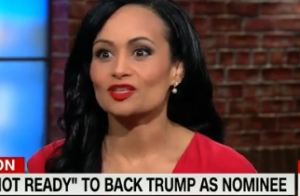 Hmm, what’s this? If you read J.D. Durkin‘s piece from this morning, “Katrina Pierson Slams Paul Ryan For Not Supporting Trump: He Isn’t Fit to Be Speaker!” you already know that Donald Trump‘s right-hand spox was on CNN’s Good Day today. She addressed Ryan’s comments about not being “ready” to support her boss in the general election.

She also took aim at the last two Republican candidates for president, John McCain and Mitt Romney. There are no surprises there, since neither man has been riding the Trump Train, but her criticisms of Romney, in particular, were rather strange.

First, she described him as being pro-abortion, and while it is definitely true that he is more moderate than other Republicans on the issue — and has been called out for it by the Trump team before — he has still voiced support for extreme “personhood” measures that would grant rights to fetuses. Further, he put Paul “Birth Control is Murder” Ryan on his presidential ticket and endorsed a politician who went on record saying that pregnancies resulting from rape are God’s will. The man isn’t a pro-choice paragon.

Next, she claimed he is pro-gay marriage. He isn’t. He definitely isn’t.

He was once reported to be cool with gay people adopting, though, which brings us to Pierson’s third accusation. She claimed he is “pro-adoption.” Surely, she meant to nail him for being in favor of gay couples adopting kids, but she didn’t. She said disdainfully that he is pro-adoption. Regardless of what she meant, we know what she said, and it is pretty unsettling to hear “pro-adoption” on a list of grievances about a person’s character when 114,556 kids in the American foster system are currently adoptable and most of those kids wait an average of three years to actually be adopted. When you are a national spokesperson, word selection counts. Assuming she was trying to talk specifically about gay people’s right to adopt, she doesn’t get a pass for this mess-up.

Further, even if she meant to say he is pro-gay adoption, that’s still wrong. Romney has gone on the record to say that a dead straight parent is still better for a kid than a gay one who is alive. He has also spoken out to say that reports of his support of gay adoption were overblown and that he merely acknowledges that legally, gay people have the right to adopt, which is a decision that has been decided by most states.

No matter how you slice what Pierson meant or said or meant to say, it’s all wrong.

There are worse things to be than, uh, “pro-adoption.”