Giuliani: If I Were Trump, I’d Skip Future Debates; Holt ‘Should Be Ashamed’ for Stop-and-Frisk Intervention 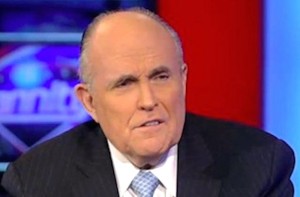 Donald Trump supporter Rudy Giuliani came off of last night’s debate by saying that Lester Holt did an awful job as moderator, and that Trump might as well skip the remaining general election debates.

One of the most contentious points of the debate was when Holt locked horns with Trump over the mogul’s recent suggestion to bring back stop-and-frisk as a way to reduce crime. The practice was found to disproportionately target minority groups and was deemed unconstitutional by a circuit judge back in 2013, though Trump defended it on the stage on Monday night.

Giuliani employed the controversial practice when he was the mayor of New York City, and he told reporters last night that Holt “should be ashamed of himself” for challenging it.

“If I were Donald Trump I wouldn’t participate in another debate unless I was promised that the journalist would act like a journalist and not an incorrect, ignorant fact checker,” Giuliani said. “If journalism has ethics, Lester Holt unethically interfering in the area of law he knows nothing about.”

When he appeared on Fox & Friends for a Tuesday post-debate analysis, Giuliani kept on attacking Holt for being “dead wrong” about a policy he described as “perfectly constitutional.”

Trump said that Holt did “a great job” last night after the debate ended, but he said this morning that he got “very unfair questions” from the NBC anchor.