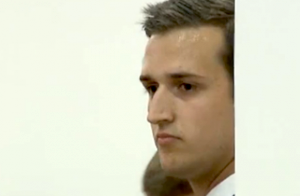 Austin Flake, the son of U.S. Senator Jeff Flake (R-AZ), pled not guilty today after he was accused of causing the deaths of 22 dogs.

Flake and his wife Logan were both arraigned and charged with 21 felony counts and seven misdemeanor counts of cruelty to animals, after an alleged act of negligence caused nearly two dozen dogs, staying at a vacation kennel owned by his in-laws, to suffocate and die in a small, overheated room last June. “Some had been wrapped in blankets and left in front of the house,” reported the New York Times, noting that Green Acre Dog Boarding claimed that they only hosted a few dogs at a time. “More than a dozen others had been piled in a tool shed.”

The young couple were watching the dogs while Logan’s parents, MaLeisa and Jesse Todd Hughes, were on vacation in Florida. The Hugheses have also been charged with 22 counts of felony animal abuse, for not properly maintaining the air conditioning in the room where the dogs eventually died in the sweltering Arizona heat.

The case has rocked the town of Gilbert, and the owners of the dogs told the Times that they saw Flake and the Hugheses’ actions as a betrayal. “It looked perfect from the outside, but we were deceived from the moment we dropped our dogs off,” said Shannon Gillette, who lost two golden retrievers.

Lawyers for Flake condemned the investigation, run by the notorious Sherriff Joe Arpaio, as “heavy on publicity but devoid of any evidence of criminal wrongdoing.”