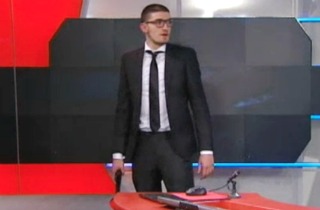 A gunman stormed into a Dutch TV station in the middle of the evening news, demanding for airtime. The gunman, dressed in a suit, held up a pistol in the NOS studio and said he wanted 10 minutes of airtime, among other demands.

The gunman was escorted to an empty studio and proceeded to walk around, ranting and saying, “The things that are going to be said––those are very large world affairs. We were hired by the security service.” Moments later he was surrounded by police, dropped the gun, and surrendered.

The channel went off-air during the heightened situation, and when it came back on, it showed video of the what the gunman did. NOS shared a letter that the gunman reportedly had on him. Here’s how they sum up its contents (rough translation courtesy of Google Translate):

The man who penetrated the NOS building had a letter with him. It says that there are eight heavy explosives were placed in the country, containing radioactive material.

He also writes that he is not acting alone and heavily armed. He says that there are five plus 98 hackers who are ready for a cyber attack.

The man warned in the letter that the outside is monitored or the live broadcast can be viewed throughout the Netherlands. If the broadcast is disturbed then they will proceed to action.

Watch the video of the incident, below via NBC News: