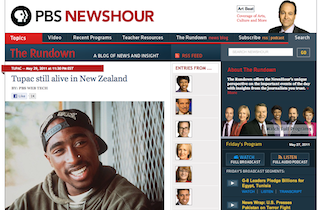 Well, here’s a story this weekend that we know for sure is the handiwork of computer hackers. The official website for the US Public Broadcasting Service has been hacked into with the hackers publishing a story (which was finally taken down as this post was being written) about the deceased rappers Tupac Shakur and Biggie Smalls both being alive and hiding in New Zealand. As silly as that sounds, the hackers have also leaked email addresses and passwords for tons of employees as well as an SQL database with information on a large part of the site.

The hackers appear to be from the same group, Lulz Security, that attacked Fox Network at the beginning of this month releasing information about their employees as well as potential contestants for the upcoming American version of X-Factor. The group took credit with an image they put up on PBS’s site under the url “http://www.pbs.org/lulz/.” Here it is below: 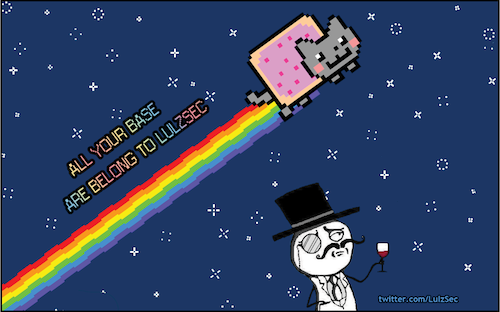 They then linked to the Tupac story on their Twitter page and followed that up with links to PBS’ information. 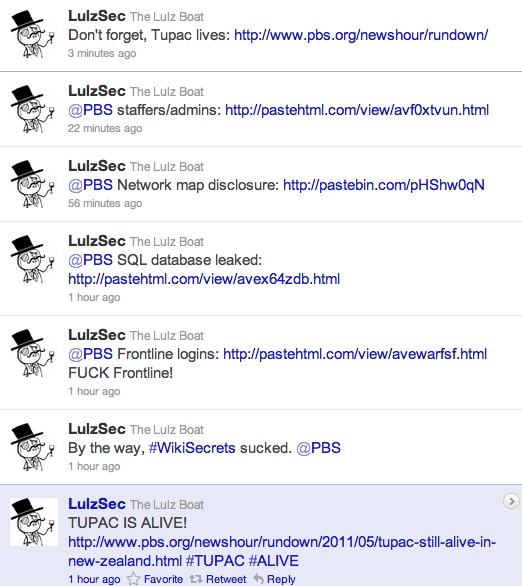 Here is the full text of the now removed article (which was credited to “PBS Web Tech”:

“Prominent rapper Tupac has been found alive and well in a small resort in New Zealand, locals report. The small town – unnamed due to security risks – allegedly housed Tupac and Biggie Smalls (another rapper) for several years. One local, David File, recently passed away, leaving evidence and reports of Tupac’s visit in a diary, which he requested be shipped to his family in the United States.

‘We were amazed to see what David left behind,’ said one of sisters, Jasmine, aged 31. ‘We thought it best to let the world know as we feel this doesn’t deserve to be kept secret.’

David, aged 28, was recently the victim of a hit-and-run by local known gangsters. Having suffered several bullet wounds on his way home from work, David was announced dead at the scene. Police found the diary in a bedside drawer.

“Naturally we didn’t read the diary,’ one officer states. ‘We merely noted the request to have it sent to a US address, which we did to honor the wishes of David.’

Officials have closed down routes into the town and will not speculate as to whether Tupac or Biggie have been transported to another region or country. Local townsfolk refuse to comment on exactly how long or why the rappers were being sheltered; one man simply says ‘we don’t talk about that here.’

The family of David File have since requested that more action be taken to arrest those responsible for the shooting. ‘David was a lovely, innocent boy’ reported his mother. ‘When he moved to New Zealand, he’d never been happier.’

His brother Jason requested that one part of David’s diary be made public in an attempt to decipher it. “Near the end,’ Jason says, ‘there’s a line that reads ‘yank up as a vital obituary’, which we’ve so far been unable to comperhend.”

David’s girlfriend, Penny, did not wish to make a statement.”

With rumors about Tupac secretly being alive having existed for years, the story from a reputable outlet like PBS has begun to spread across the Internet already. So, while their tech employees have presumably been working hard to erase the hack, people like Teresa Gorman, NewsHour’s Social Media and Online Engagement worker has been trying to stem the tide on Twitter. 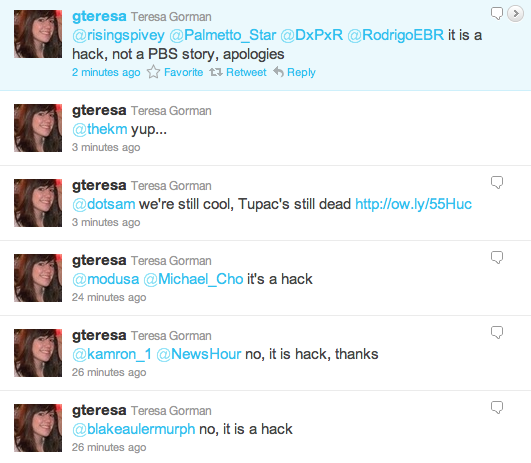 Surely not an ideal way to spend a holiday weekend.