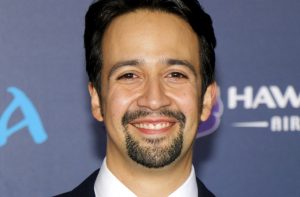 Hamilton creator Lin-Manuel Miranda might not be the biggest fan of vice president-elect Mike Pence, but maybe that’s only because Pence never took part in a bombing campaign against the United States government that murdered five people and maimed countless others.

There’s no point in spending too much time rehashing the entire Pence-Hamilton controversy here, so I’ll just highlight two important aspects to keep in my mind. The first is that it was Miranda himself who wrote the speech and asked his friend and co-star to deliver it. The second is that it’s largely irrelevant whether the speech was intended to condemn Pence (they insist it wasn’t, even though, c’mon, it certainly was). The result of their display was to make it perfectly clear to Pence and anyone who shares his views that the price of admission was condescension.

Which brings us to Miranda’s stance on another man that others might find… dare I say, deplorable?

I wish I was with every ??in Chicago RIGHT NOOWWWWW

Y @MMViverito, when you talk to Don Oscar, díle I’ve got a show for him in Chicago. It’ll be my honor to play Hamilton the night he goes.
??

Oscar Lopez Rivera was a member of the FALN, a Stalinist-Marxist terrorist organization devoted to Puerto-Rican independence that launched over a hundred bombing attacks in the ’70s and ’80s. Miraculously, only two planted bombs led to death. Here’s The New York Daily News‘ account of the one of those bombings, of the Fraunces Tavern in 1975.

At 1:29 p.m., a tremendous explosion rocked the building, sending shivers up to the 60th floor cafeteria of the nearby Chase Manhattan Bank building. Firefighters found a scene of “utter havoc,” with blood- and dust-covered men and women, many in business attire, writhing in agony in the streets, or shrieking under piles of rubble, or wandering about with stunned, blank eyes.

Sherburne, Connor and Berger died on the spot. Gezork lost his fight for life later at the hospital.

Within 15 minutes — even as, the News noted, “dazed and screaming victims, one of them with an arm torn off, were being carried away” — the Associated Press received a phone call. The caller boasted that the bomb was the handiwork of the FALN, the Armed Forces of Puerto Rican National Liberation, radicals devoted to using violence to free the island from the grips of the United States.

Lopez Rivera was more than just a grunt: informants testified he was their chief bomb-maker and in charge of training others to do the same. When he and eleven others members of the FALN were caught and arrested for their role in an armed robbery, none of them denied the facts of the charges against them. No one was ever convicted of the Fraunces Tavern attack but only because no one needed to be: Lopez Rivera got 55 years for his role in planning the bombing of the Democratic Party of Chicago and and additional 15 years when he tried to escape prison.

Despite blistering opposition from 95 GOP and Democratic Senators, the FBI, his own Department of Justice and his own wife, President Bill Clinton offered all imprisoned FALN members clemency in 1999 on the sole condition that they renounce terrorism. Lopez Rivera refused, and was the only member who remained in prison. Until yesterday that is, when Barack Obama granted Lopez Rivera clemency without conditions.

Now, unrepentant and unreformed, Miranda embraces this man. “Sobbing in gratitude,” even.

Miranda’s outreach would be shocking in any case. But when taken in the context of his other political stances and proclamations, he comes off as a massive hypocrite. Remember when he “woke up with a very pronounced case of moral clarity” after the election? Or when he denounced terrorism and “senseless acts of tragedy” at the Tonys? And yes, there was the time Miranda wrote on behalf of his cast that they were “alarmed and anxious” that Pence “will not protect us… or defend us and uphold our inalienable rights,” all the while defending a man who robbed others of their rights with cold, calculated indifference.

Miranda’s “moral clarity” extends no further than his political beliefs allow. No doubt his affinity for Lopez Rivera stems from their shared belief in Puerto Rican independence (the fact that Lopez Miranda’s vision of an independent Puerto Rico would be a totalitarian Communist hellscape is evidently a secondary concern). Pence on the other hand was opposed to Miranda’s politics and was therefore “the enemy,” even though whatever his flaws, he hasn’t left a trail of orphans and widows in his wake.

So we’re left with the situation where literal terrorists are treated with more respect, decorum, and deference than the incoming vice president of the United States. And then Miranda and his peers wonder why their political posturing isn’t taken seriously.