How About That? One Of The Strongest Defenses Of Rupert Murdoch Came Out From The NY Times 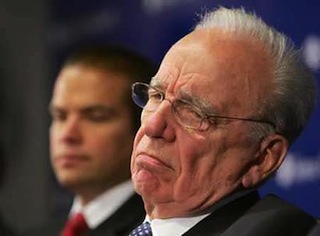 At this point, it’s pretty difficult to find ink drying on any nice words in regards to Rupert Murdoch. As News International’s phone hacking scandal gets bigger and bigger, the man has become an absolute pariah in England and the story is slowly making its way across the pond. However, this morning, an op-ed has appeared in one of this nation’s largest papers, titled “In Defense of Murdoch”; the column attempts to show another side of the media monarch. Some might find it a bit surprising that this defense comes from none other than the New York Times. And it’s written by Roger Cohen, a Brit no less!

Cohen opens his column by explaining it was “prompted in part by seeing everyone piling in on the British hacking scandal” and admitting that, yes, “Fox News, the U.S. TV network started by Murdoch, has with its shrill right-wing demagoguery masquerading as news made a significant contribution to the polarization of American politics.” And, no, Cohen makes no attempt to defend the hacking itself, calling it “indefensible.” Instead, he defends Murdoch the man as well as his business ethic, calling him “good for newspapers over the past several decades, keeping them alive and vigorous and noisy and relevant.”

“So why do I still admire the guy? The first reason is his evident loathing for elites, for cozy establishments, for cartels, for what he’s called ‘strangulated English accents’ — in fact for anything standing in the way of gutsy endeavor and churn. His love of no-holds-barred journalism is one reason Britain’s press is one of the most aggressive anywhere. That’s good for free societies.

The second thing I admire is the visionary, risk-taking determination that has placed him ahead of the game as the media business has been transformed through globalization and digitization. It’s been the ability to see around corners that has ushered him from two modest papers inherited from his father in Adelaide to the head of a company with about $33 billion in annual revenues.”

But I thought The New York Times was was supposed to be a home for Fox-hating, socialist, elites. Not Murdoch-defending, elitist-insulting, capitalists. Hilariously, Robert H. Christie, Senior Vice President, ofCorporate Communications for The New York Times Company played with the seeming disconnect in his promotion of the piece.

Of course, not every Times columnist feels the same way. In a blog post, Paul Krugman remarked that “it’s starting to look as if News Corp is better viewed as a criminal enterprise than as a media organization.”

Dueling opinions? Both sides given equal merit? Maybe The New York Times is fair and balanced after all.