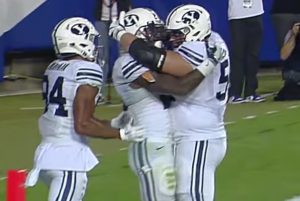 The college bowl season is well underway, and tonight’s matchup features an intriguing pair of teams out west who had good seasons, and were very close to having excellent seasons. It’s the San Diego County Credit Union Poinsettia Bowl featuring the BYU Cougars and the Wyoming Cowboys.

BYU went 8-4 on the season. But their four losses came at the hands of solid teams; Utah, UCLA, West Virginia, and Boise State. And they came by a ridiculously slim combined margin of eight points. That’s right — four losses by eight points combined. The Cougars just couldn’t find a way to win some of the tight ones, and it cost them a chance at a New Year’s Six bowl.

Wyoming too was close to a special season. They defeated traditional Mountain West conference powers Boise State and San Diego State at home en route to winning the conference’s mountain division. But the Cowboys couldn’t beat San Diego State a second time, and ended up as Mountain West runner-ups. Still, the Cowboys are clearly very much on the improve under third year head coach Craig Bohl.

Kickoff for the game is 9:00 p.m. ET. Jason Benetti and Kelly Stouffer will call the action. The game will air live on ESPN. It will also be streamed online free with a cable subscription, via WatchESPN. The Watch ESPN app can be downloaded from the Apple App Store, the Google Play store, and the Windows store.