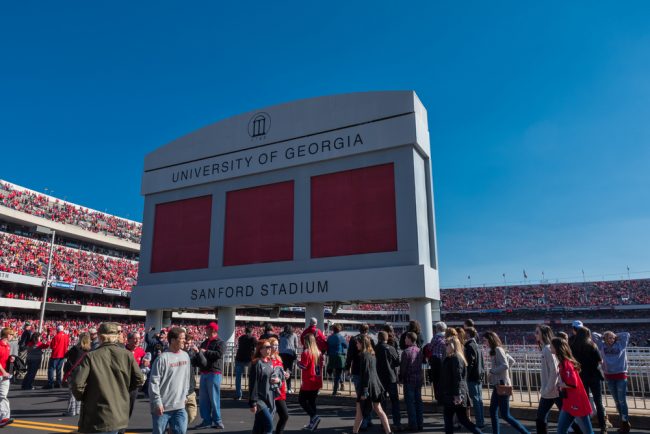 The first of those games kicks off Saturday afternoon at Jordan-Hare Stadium, when the No. 1 ranked Georgia Bulldogs head to Alabama for an SEC showdown with the No. 10 Auburn Tigers.

Georgia earned the top spot in the rankings — even ahead of undefeated Alabama — by virtue of a few extremely impressive wins. In conference, the Bulldogs have blown out the likes of Florida, Tennessee, and No. 18 Mississippi State. Out of conference, in extremely rare trip north of the Mason-Dixon line, Georgia scored a terrific road win against No. 3 Notre Dame 20-19. A win over a top 10 conference foe on the road in a hostile environment might just be enough to secure a berth in the college football playoff, even if Georgia loses to Alabama in the SEC title game.

Auburn, meanwhile, has big plans of their own — with the Iron Bowl still on tap two weeks from now. Wins over the two top-ranked teams in the country should get the Tigers a playoff invite, despite the fact they’ve lost two games already this year.

Kickoff is at 3:30 p.m. ET. CBS will broadcast the game live. Brad Nessler has the call along with Gary Danielson. CBS Sports will also stream the action free with a cable subscription on its website, as well as its app. The CBS Sports app can be downloaded via Apple’s iTunes store, and the Google Play store.