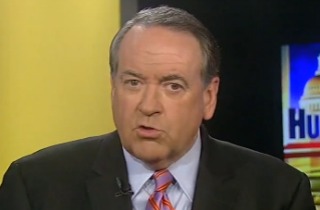 Between 2000 and 2008, roughly 1.5 million New Yorkers left the Empire State and moved elsewhere, and of those 1.5 million, several thousand of them moved to Florida — a move that, according to former Arkansas Governor and current Presidential candidate Mike Huckabee, threatens to make the state Super Liberal, and their burdensome regulations threatens to snap the peninsula off the continent, where it will drift southward to hang out with commie Cuba.

Speaking to a gathering at Gov. Rick Scott (R-FL)’s new Economic Growth Summit at Disneyworld (along with a bunch of other GOP presidential hopefuls), Huckabee praised Scott’s economic policies, but added that since they were so successful, they’d attracted disillusioned New Yorkers to the Sunshine State. (Considering the rapidly-escalating misery of a New York winter, sunshine likely attracted them to the Sunshine State, too.)

But with New Yorkers, inevitably, comes liberalism. Via the Daily Beast:

“He’s giving people hope and jobs, and the result is evident in the fact that 803 people every day are coming into this state and moving here,” Huckabee said.

“Many of them are from New York,” he continued. “I just hope they leave their New York attitude of high taxes and high regulation back in New York City, back in Albany—bring their best recipes for shrimp and best recipes for grouper, but for gosh sake, do not bring that regulatory environment from New York.”

Alright, fine, it’s not an unfounded fear: the New York Daily News reported that in recent years, roughly 50,000 people per year specifically left New York for Florida, “more than twice the number that move from Florida to New York.” Partially due to this migration, the U.S. Census found that Florida had displaced New York as the third most populous state in America — and, considering Florida’s reputation as a swing state, an influx of frigid New Yorkers into Miami could potentially influence statewide elections, not to mention local ones.

(P.S.: while grouper may not be my favorite fish, here is my favorite recipe for shrimp. Yeah, I eat them with their heads on.)