‘I Wish You the Best of Luck’: Schwarzenegger Shrugs Off Trump’s Apprentice Insults

‘I Wish You the Best of Luck’: Schwarzenegger Shrugs Off Trump’s Apprentice Insults 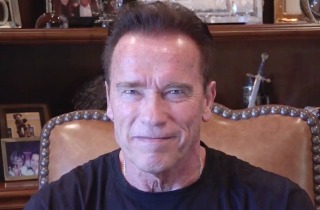 Arnold Schwarzenegger has decided not to be bothered by what Donald Trump says about how he’s hosting the President-Elect’s old reality show.

In the midst of a Twitter tirade earlier this morning, Trump decided to take a swing at Schwarzenegger by complaining about how Celebrity Apprentice got way better ratings when he was still running the show.

Wow, the ratings are in and Arnold Schwarzenegger got "swamped" (or destroyed) by comparison to the ratings machine, DJT. So much for….

being a movie star-and that was season 1 compared to season 14. Now compare him to my season 1. But who cares, he supported Kasich & Hillary

Schwarzenegger took notice of this, though it looks like he’s letting these shots bounce off of him like the Terminator he once was.

There's nothing more important than the people's work, @realDonaldTrump. https://t.co/fYtAfFPMKF

I wish you the best of luck and I hope you'll work for ALL of the American people as aggressively as you worked for your ratings.

Schwarzenegger also re-posted a video asking Trump to have a care about a famous quote from Abraham Lincoln‘s first inaugural address:

Please study this quote from Lincoln's inaugural, @realDonaldTrump. It inspired me every day I was Governor, and I hope it inspires you. pic.twitter.com/QRoOFTZfQ9

Trump is still an executive producer for the show, though he said he would devote “zero time” to it during his presidency.