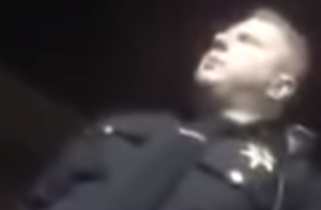 A new online video has gotten a New York deputy in trouble after catching him swearing profusely at and slapping someone as he was trying to inspect the back of their car. Sgt. Shawn Glans noticed a .22-caliber rifle in the backseat of a car, and two individuals walking back to that car from the forest.

In the video, Glans demands to search the back of the car to the objections of the two young men who say he has no reason to. Glans says, “Let me see your fucking keys” and “You want to fucking resist?” before slapping one of them in the face.

When the other person, the one recording the video, tries to talk to Glans, he cranks up his intensity level and says, “I’ll rip your fucking head off and shit down your neck.”

The video went viral in the past two days and Glans got suspended. Sheriff Michael Zurlo said, “I don’t condone activity as it’s portrayed and we’re going to look into it and we’ll handle this quickly and swiftly.”

For his part, Glans relayed his side of the story and said he’d do it the same way again:

“I’m all about doing the right thing. I had to go to that point because of the factors that came into play. There was a gun that was involved (that) I spotted in the vehicle…

“If I had to do it all over again… I’d probably do the same thing. If I knew the camera was there, no, because it does look bad.”

Watch the encounter, below: