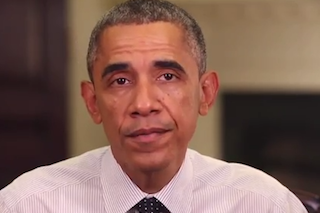 On Monday morning, President Barack Obama released his strongest statement yet in defense of net neutrality. In both a video message and written statement, the president urged the FCC to reclassify consumer broadband internet service under Title II of the Telecommunications Act, which would allow the agency to prohibit companies like Comcast and Verizon from giving preferential treatment to certain web companies or deliberately slowing down others.

“I am asking the Federal Communications Commission (FCC) to answer the call of almost 4 million public comments, and implement the strongest possible rules to protect net neutrality,” Obama stated Monday.

By reclassifying the internet under Title II, it would be treated like other services that have become basic utilities in the United States. “In plain English,” the president said, “I’m asking them to recognize that for most Americans, the internet has become an essential part of everyday communication and everyday life.”

“The Internet has been one of the greatest gifts our economy — and our society — has ever known,” Obama concludes. “The FCC was chartered to promote competition, innovation, and investment in our networks. In service of that mission, there is no higher calling than protecting an open, accessible, and free Internet.”

Prior to this latest policy directive, President Obama’s strongest statements on the matter came during a Q&A session at a summit for African leaders in Washington, D.C. this past summer. “The position of my administration, as well as I think a lot of companies here is you don’t want to start getting a differentiation in how accessible the internet is to various users,” Obama said. “You want to leave it open so that the next Google or the next Facebook can succeed.”

Following Obama’s statement, FCC chairman Tom Wheeler put out one of his own, saying he was “grateful for the input of the president” and that the FCC would “incorporate the President’s submission into the record.”

“Like the President, I believe that the Internet must remain an open platform for free expression, innovation, and economic growth,” Wheeler added. “We both oppose Internet fast lanes.”

Watch Obama’s video message below, via The White House: