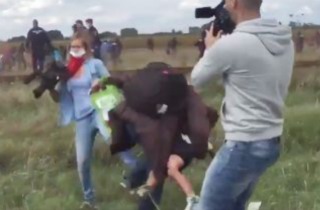 Prosecutors in Hungary have decide to proceed with charging a camerawoman for the actions that launched her into international infamy approximately one year ago.

Petra László was fired from N1TV last September after she was caught on film kicking and tripping refugees at the Serbian border. László apologized for her actions, but she said at the time that she planned on suing Facebook and one of the migrants she tripped once her criminal trial for the incident was over.

Prosecutors announced on Wednesday that they are charging László with “breach of peace,” and will seek a conviction on the charge. According to New York Times, the charge is categorized as “antisocial, violent behavior capable of inciting indignation or alarm, and it carries a maximum sentence of two years in prison unless there are aggravating circumstances.”

László has not yet commented on the new developments, but in her previous apology, she stated that she is not racist, despite her actions occurring while she worked for a far-right, anti-immigration network at the time. She also stated that she thought she was coming under attack during the encounter, and that she resents the xenophobic accusations that have come her way.

“It’s hard to make good decisions at a time when people are in a panic and many hundreds of people rushing,” László previously stated according to The Daily Mail. “I do not deserve the political witch hunts against me, nor the smears, [or] the death threats… I am truly sorry.”

Watch the incident in the video above, via Reuters.