Is Newsweek‘s Internal Ad The Most Prententious Ad Of All Time?

Is Newsweek‘s Internal Ad The Most Prententious Ad Of All Time?

I like Newsweek. I’m a subscriber, and read most of the magazine on a weekly basis.

But the internal ad in this week’s issue may be one of the most pretentious self-advertisements of all time. Let’s take a look.

In May, Newsweek went through a redesign promising a magazine that is “sophisticated and airy,” with less focus on “celebrity news” and more on “the most pressing issues of our time.” The results of this goal have been mixed, but the unsaid takeaway was the magazine was looking to become more exclusive instead of inclusive. It would reach a smarter audience instead of a greater one. Quality would win out over quantity.

Whether Newsweek wants to admit this didn’t matter – their ad this week for Newsweek.com/Gift, hoping their print readers sign their friends up for the magazine, is a clear indication of their mindstate. Here it is, then let’s talk about it: 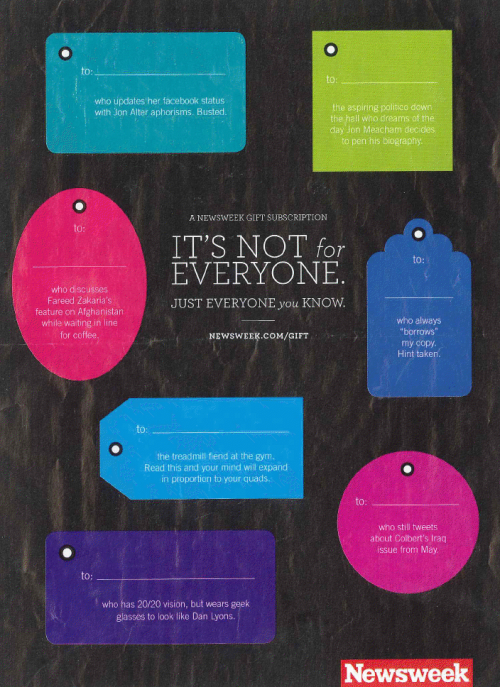 So the tagline here is “It’s Not for Everyone. Just Everyone you Know.” And some examples of the mock gift cards:
• “To ___ who updates her facebook status with Jon Alter aphorisms. Busted.”

• “To ___ the aspiring politico down the hall who dreams of the day Jon Meacham decides to pen his biography.”

We get the concept – highlight the stars of Newsweek in a jokey-insidery way. See, if you read the magazine, you get it. You’re in the club. But seriously, is this the way to attract new people to the magazine? By massaging the self-important egos of their existing readers?

Reading this on the 6-train on the way to work this week, I just felt like an asshole.