Is This The Stupidest Breitbart Piece Of All Time?

Is This Anti-Megyn Kelly Breitbart Piece the Stupidest of All Time?

The sad answer to the question in the headline is probably not. But Breitbart’s latest attack on Fox News host Megyn Kelly is certainly a doozy. 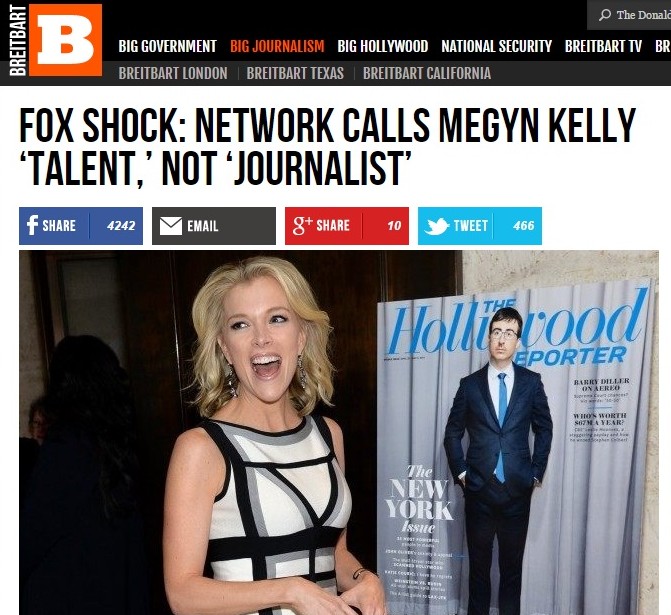 “Perhaps Ms. Kelly would prefer to think of herself as a ‘journalist’ or as an ‘anchor’ or at least as a ‘host,'” the author hyperventilates. “But apparently that is not how she is thought of by the Fox News Channel brass. To them, she is ‘talent.’”

Anyone with even the smallest amount of exposure to the media world should know that ‘talent’ is an extremely common way of referring to on-air reporters and hosts alike. MSNBC, for example, has a list of “talent bios” on its website. Presumably they don’t believe that reporters like Richard Lui aren’t journalists (or that Alex Witt is actually talented). CNN also refers to its hard news journalists as “talent.”

Likewise, even though the piece was an opinion piece, it was posted under the byline “Breitbart News” and without its author taking credit. Perhaps the anonymous author was rightly concerned about taking credit for a piece that is, to put it politely, fermented horseshit. But it takes a certain level of cowardice and disrespect to attack Fox News while simultaneously shielding yourself from any blowback from the network. (Will the Breitbart author stop making appearances on Fox News? Doubtful.)

This opinion piece will therefore also be posted without a byline. The anonymous author was tempted to use this opportunity to to wildly and baselessly accuse Breitbart employees of writing the story. But instead, you can vote on who you think is the author of Breitbart piece in the poll below.