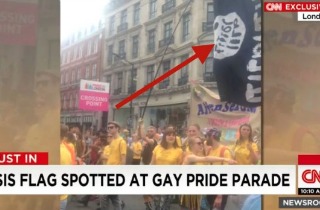 On June 27, CNN international Reporter Lucy Pawle had one of the biggest cable news goofs ever when she reported on an ISIS flag at a gay pride parade in London, when it was actually a spoof depicting the Arabic script as sex toys. On Tuesday, Paul Coombs, the flag’s creator, wrote a piece for The Guardian about why he created the flag, while also blasting CNN’s less-than-accurate reporting.

“The decision to make the flag was a simple one,” Coombs wrote. “It has become a potent symbol of brutality, fear and sexual oppression. If I wanted to try and stimulate a dialogue about the ridiculousness of this ideology, the flag was key.”

Hours later, Coombs wrote, he saw the CNN’s mistaken report, and that #DildoIsis was spreading across Twitter:

“How could a report so hysterical and so clearly false possibly get onto the air, discussed by a terrorism expert? CNN correspondent Lucy Pawle described my flag as a “very bad mimicry” but the only bad mimicry I could see was CNN’s impression of a reputable news organization. What does this say about every other report that they broadcast? And why have they not mentioned it since?”