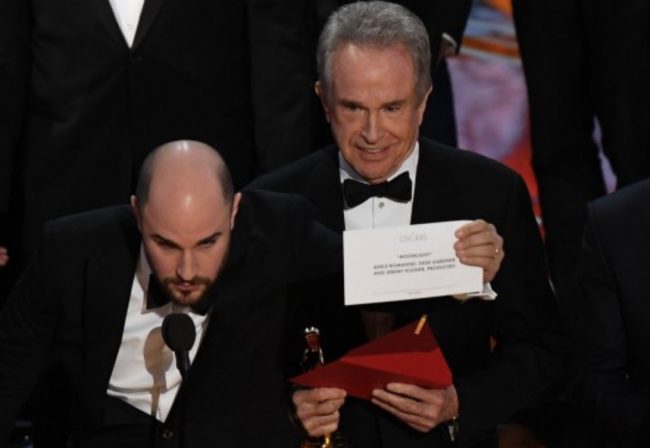 Twitter is full of hot takes on Monday morning as everyone’s reacting to the unbelievable blunder that took place at the end of the Oscars.

The show was nearing its conclusion as Warren Beatty announced that La La Land was the winner for this year’s Best Picture Award. As the film’s creators and actors were giving thanks to everybody on stage, it was announced that a mistake occurred with the “Best Picture” envelop, and the winner was actually Moonlight.

The resulting confusion over the mishap led to an instant explosion of activity across the Internet, and a wide variety of jokes were made about the slip-up.

Some tweeters went with their own jests:

YOOOOO THE SEASON FINALE OF BLACK HISTORY MONTH IS SO LIT

Other people compared this to Steve Harvey‘s infamous 2015 flub when he crowned the wrong woman as the winner of Miss Universe:

Have your people call our people – we know what to do. #Oscars #MissUniverse

Steve Harvey sitting at the crib like…
????????? #Oscars pic.twitter.com/FFqgDwgX1i

Some people capitalized on the new meme of Ryan Gosling that took off during the show:

"I switched out the card for best picture" pic.twitter.com/lHoXF5HsZh

And then…there was everyone who likened the show to the 2016 election, and made all sorts of political references:

when you hear they're declaring real winners late so you slide back thru to see what's poppin pic.twitter.com/xst2K6sDBv

You know what the problem is — millions of Academy members voted illegally.

This is like the James Comey letter of awards shows. #Oscars

Most nights, I have a dream in which what just happened at the #Oscars actually happened on election night.

If there's one thing that's truly American, it's our peaceful transfer of power from one #BestPicture winner to another. #Oscars

In London, Assange is stroking his hairless cat and chuckling, "Take THAT Gosling."

I don't believe anything anymore. We have to redo the Grammys, the Super Bowl, the ELECTION! It's all rigged! #Oscars