James Carville Has A Word Of Advice For Obama: ‘Panic!’ 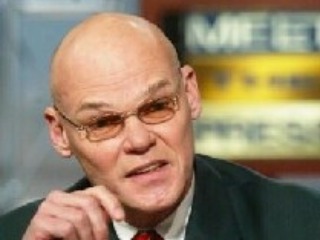 Democratic strategist and CNN contributor James Carville has penned an op-ed piece offering a simple bit of advice for our Commander-in-Chief: “Panic.” Specifically an organized sort of panicking that requires multiple, specific steps.

“We are far past sending out talking points,” write Carville. “Do not attempt to dumb it down. We cannot stand any more explanations. Have you talked to any Democratic senators lately? I have. It’s pretty damn clear they are not happy campers.”

To address these unhappy campers, Carville offers a list of suggestions: Fire somebody (Preferably “a lot of people” because “This may be news to you but this is not going well. For precedent, see Russian Army 64th division at Stalingrad. There were enough deaths at Stalingrad to make the entire tea party collectively orgasm.”), indict people, make a case like a Democrat, and hold fast to an explanation.

Carville also expresses mild terror at what Obama’s failure to get re-elected might mean for the future of the nation:

As I watch the Republican debates, I realize that we are on the brink of a crazy person running our nation. I sit in front of the television and shudder at the thought of one of these creationism-loving, global-warming-denying, immigration-bashing, Social-Security-cutting, clean-air-hating, mortality-fascinated, Wall-Street-protecting Republicans running my country.

The course we are on is not working. The hour is late, and the need is great. Fire. Indict. Fight.

Take a look at Carville’s piece and let us know what you think. Good advice? Can Obama win back Democrats at this point, or are things for him beyond repair?