Jets Fans on Twitter Are Thrilled to Be Rid of Owner Woody Johnson, Trump’s Pick For UK Ambassador

Jets Fans on Twitter Are Thrilled to Be Rid of Owner Woody Johnson, Trump’s Pick For UK Ambassador 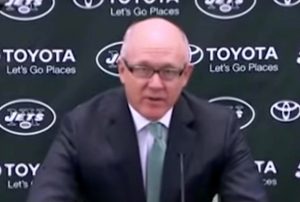 A move that had long been rumored is now official: New York Jets owner Woody Johnson has, according to multiple reports, been tapped by President-elect Donald Trump to serve as ambassador to the United Kingdom.

Johnson has been a donor to many republican candidates over the years — including Trump, for whom he served as a key fundraiser during the general election campaign.

During the republican primary, Johnson served as finance chairman for Jeb Bush — a fact that Trump pointed out with glee as Bush’s candidacy faltered.

Woody Johnson, owner of the NYJets, is @JebBush’s finance chairman. If Woody would’ve been w/me, he would’ve been in the playoffs, at least!

The news likely means that Johnson will turn day-to-day operations of the Jets over to someone else. And given the club’s mostly subpar performance ever since Johnson purchased the team in 2000, Jets fans were elated with the news. The Jets are coming off of a 5-11 season, and haven’t made the playoffs since 2010.

So naturally, a large portion of the fan base is hoping that Donald Trump Made the Jets Great Again with this appointment. Here’s a sampling of the reaction on Twitter from fans, journalists, and others:

If Trump puts Woody Johnson in charge with U.K. the Jets might actually become great again. Thank you @realDonaldTrump

This is great news, FOR THE JETS. https://t.co/iJRezTm2Lx

Jets fans owe Donald #Trump a “Thank you” even of they didn’t vote for him https://t.co/dSmaTaCn5C

Woody Johnson is getting shipped to England?!?!?! We can finally rebuild. Maybe Trump presidency will have its good moments.

@EnviousTardive oh yeah as an American its fucking ridiculous, but as a Jets fan it’s great news. Woody was the reason for the Tebow debacle

Woody Johnson is taking his immense success at running the Jets and applying it to British relations. Who is Sanchez in this situation?

Donald Trump becomes president tomorrow. Woody Johnson is going to be ambassador to United Kingdom. What could possibly go wrong?

Woody Johnson is trying to get as far away from the Jets as possible https://t.co/4QrnmDI5Nb

If you ever wondered how the jets could take Ls outside of the season and the draft (where they always do)… wonder no more. https://t.co/tGlxdVF9vc

In Trump’s defense, it’s hard for America to “win again” when the Jets owner is stateside. https://t.co/RAalw7Uvuq

The curse is lifted! No longer will this reactionary billionaire meddle with the day to day Football Operations of the New York Jets!#Jets https://t.co/8KgwTTotns

The only way Jets owner Woody Johnson’s appointment as ambassador to the UK is good for the America is if he takes the Jets with him.

“We’re gonna put together the best and the brightest. Say, who’s running the New York Jets these days?”

If Jets fans had known that a vote for Trump would ultimately mean Woody Johnson relinquished control of the team, might’ve helped in NY/NJ! https://t.co/1cHByL29kr

. @BillSimmons with Woody Johnson headed to the UK, any chance he can take the Jets with him?