Jon Stewart Crawls Back To Relevance With ACORN Takedown
video

Jon Stewart Crawls Back To Relevance With ACORN Takedown 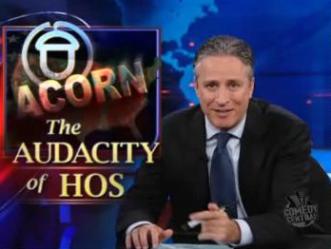 After a three-week vacation, The Daily Show returned Monday night and looked like a show that had just missed three weeks of news.

It’s still catch up time for Jon Stewart and crew, but last night the show was spot on in a takedown of ACORN – and the reporters who didn’t break the story.

While crossing into Fox News/Glenn Beck territory, Stewart first turned his attention to the stars of that first ACORN tape. Joking about it being an isolated incident, Stewart said, “It’s Baltimore – I’ve seen The Wire, the place is a shithole!”

But there was the D.C. tape, then the New York City tape. (He’s still one behind.) Then he looked at who broke the story – the fresh faced up-and-comers James O’Keefe and Hannah Giles. And who was way behind.

“You’re telling me that two kids from the cast of ‘High School Musical 3’ can break this story with a video camera and their grandmother’s chinchilla coat, and you got nothing?” said Stewart of the mainstream media. “I’m a fake journalist, and even I’m embarrassed these guys scooped me.”

As more information comes out – and more action is taken against ACORN – the mainstream media is forced to cover the story. But it is true that despite efforts by Fox News and others on the right to “expose” ACORN even before the presidential election, no real results were seen until O’Keefe and his hidden camera took to the offices, and YouTube (and BigGovernment.com). And without the results, the mainstream media, and The Daily Show stayed silent. It’s a testament to the work of O’Keefe for the change.