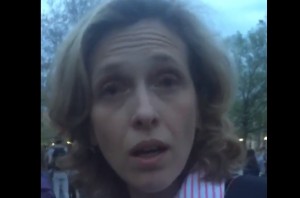 Washington Examiner journalist Ashe Schow reported Thursday that she was being harassed while filming at Washington, D.C.’s American University.

The students were protesting a speech by Breitbart’s Milo Yiannopoulos, a controversial conservative firebrand and self-described “dangerous faggot.” “While our administration may not care about the safety of trans students, multicultural students, and survivors of sexual violence, we, the students will unite to prove that we do care, and say NO to Milo’s bigotry,” reads the Facebook page for the protest.

But when Schow went to the protest, she was met with fierce resistance from an adult woman, who demanded she stop filming and go inside with her. “Excuse me, are you kidding me?” she says when she realizes she’s being filmed by a smart phone, threatening to call the police.

Here is the Melissa Click of American University. We have much much more footage too. pic.twitter.com/C8cLY9U6Da

“There are certain regulations the university is guided by,” the woman can be heard saying in another video posted to Twitter. “We are not just providing a room, we’re providing also a safe speech for everybody who works or studies on this campus.”

@AsheSchow All in the name of creating a “safe space” pic.twitter.com/99qBq3anqW

Schow went on to tweet that the woman did call the police, but in true poetic justice she was escorted away instead of the reporters.

Lol the police came over and she thought they were going to save her but actually they escorted HER away https://t.co/eA1i1q1Her