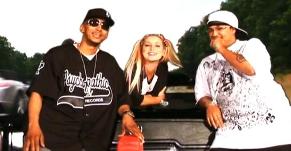 At the 11th Annual Gathering Of Juggalos, ninjas!

Over the weekend the 17-minute infomercial for the Insane Clown Posse-headlined event premiered on YouTube, and it will become a viral video sensation. “It’s fast becoming world-renowned for its uniqueness,” said the f-bomb-dropping announcer. “It’s the nation’s only truly underground music festival with no corporate sponsorship. It’s the infamous gathering of the Juggalos!”

Why would you want to go to this event? Well for one thing, the “comradery.” But also: “You’ll meet people, make future best friends, you’ll probably get laid, and you will realize the family coming together is really what this is all about.”

It may sound cult-like, but just wait until you hear the line-up of musical acts, comedians, wrestlers (?) and more. Here’s a brief list of the guests: Method Man and Redman, Lil Kim, Coolio, Vanilla Ice, Tom Green, Gallagher, Ron Jeremy, Tila Tequila. Also Todd Bridges and Butterbean will be wrestling (but not “flashlight wrestling” which will take place at 4am and where some of the wrestlers promise to be “drunk as hell”). Other attractions include helicopter rides, “seminars” and midgets (“if you like midgets, we’ve got midgets for ya,” promises the announcer.)

If you’re unfamiliar with the origins of this Juggalo festival, Saturday Night Live hilariously parodied the ’09 version of the infomercial – which the Insane Clown Posse called a “dope ass honor!” They also recently spoofed the ICP’s latest rap video, “Miracles.”

If you’d like to attend, it begins August 12 and you can pick up tickets at Hot Topic. Not kidding! Enjoy: