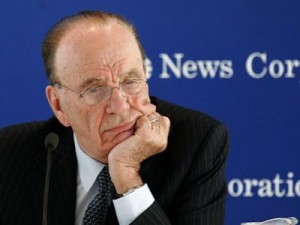 Apparently, before Julian Assange was arrested in London, he penned a defensive editorial for The Australian. In the piece, Assange asserts that Wikileaks has “coined a new type of journalism,” that his organization has “changed whole governments” without hurting a single person, and that as a truth-teller, Assange himself has a close resemblance to another pair of famous, Australian media moguls: Rupert Murdoch and his father, Keith.

Here’s the beginning of Assange’s editorial:

In 1958 a young Rupert Murdoch, then owner and editor of Adelaide’s The News, wrote: “In the race between secrecy and truth, it seems inevitable that truth will always win.”

His observation perhaps reflected his father Keith Murdoch’s expose that Australian troops were being needlessly sacrificed by incompetent British commanders on the shores of Gallipoli. The British tried to shut him up but Keith Murdoch would not be silenced and his efforts led to the termination of the disastrous Gallipoli campaign.

Nearly a century later, WikiLeaks is also fearlessly publishing facts that need to be made public.

I grew up in a Queensland country town where people spoke their minds bluntly. They distrusted big government as something that could be corrupted if not watched carefully. The dark days of corruption in the Queensland government before the Fitzgerald inquiry are testimony to what happens when the politicians gag the media from reporting the truth.

These things have stayed with me. WikiLeaks was created around these core values. The idea, conceived in Australia , was to use internet technologies in new ways to report the truth.

Cynics will probably sneer at the parallel Assange draws, or at least part of it; regardless of what Keith Murdoch did as a journalist, his son is much better-known for tarting up the press than for being a fearless defender of the truth. Assange’s comparison is doubly questionable since he goes on to call himself and WikiLeaks “the underdogs”—Murdoch the Younger is many things, but an underdog ain’t one of them.

Read the rest of Assange’s note—in which he predictably decries the persecution he’s faced—at The Australian.