It seems that Tom Hanks has a new charity of choice: The White House Press Corps.

And apparently this isn’t the first time that first time that Forrest Gump has sent the Press Corps a new coffee machine. CNN’s Jake Tapper says that this is the “third time in the last few years” that Mr. Hanks has sent this specific gift.

This is the third time over the last few years that Mr. @tomhanks has sent a brand new espresso machine to the White House press corps pic.twitter.com/TRkSKBwlYe

Hanks attached a note with gift. 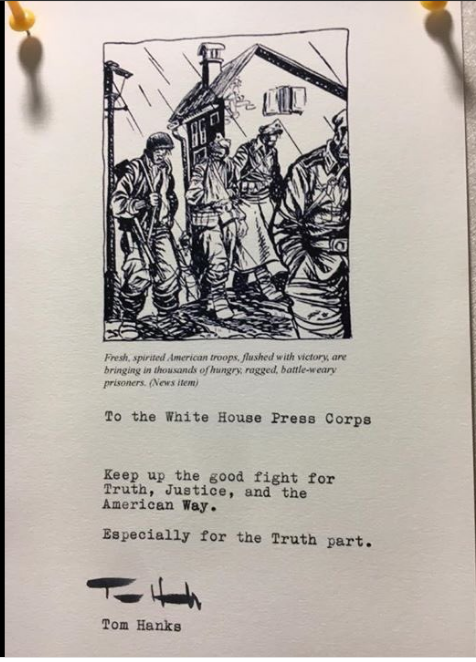 The metaphor isn’t hard to catch given Hanks’s personal inscription: “Keep up the good fight for Truth, Justice, and the American Way. Especially for the Truth part.”

As for why the Cast Away star has a habit for gifting new espresso machines to the Press Corps every few years, well, we can only imagine, given some of the performances we’ve seen in recent press briefings, that the thing gets a lot of use. Perhaps First Lady Melania Trump will respond in kind and gift the Press Corps a palate of herbal teas, given her recent propensity for singing the praises of natural remedies.