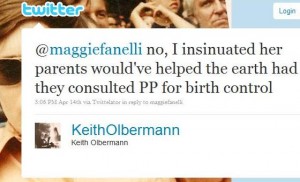 Last Thursday, future Current TV host Keith Olbermann touched off some controversy when he tweeted, about conservative pundit S.E. Cupp, “On so many levels she’s a perfect demonstration of the necessity of the work Planned Parenthood does”

After several days of Twitter fighting, and online buttals and rebuttals, Olbermann has opted to make non-factual statements about his intent, rather than simply to apologize.

It all started with Olbermann retweeting a link to the transcript for this CNN clip, along with his Planned Parenthood quip:

Olbermann was immediately set upon by people accusing him of wishing that Cupp had been aborted. It’s pretty clear that this was not the case, given the careful wording of the tweet, and the fact that the premise of Olbermann’s central disagreement with Cupp is that Planned Parenthood is not mainly an abortion provider.

For good measure, though, Olbermann explained his meaning in a tweet later that day:

I never mentioned abortion. I said her parents could have used counseling by PP rather than get the results they did

There are many types of counseling, though, so what type was he specifically referring to?

no, I insinuated her parents would’ve helped the earth had they consulted PP for birth control

That’s pretty clear, isn’t it? Sure, there are those who feel that this crossed a line, but give Olbermann credit, he’s sticking by his hellfire quote, and giving a prominent conservative hell in the process. Except he isn’t.

I didn’t say she should have been aborted. I said her parents could’ve used PP to learn how not to raise a moron 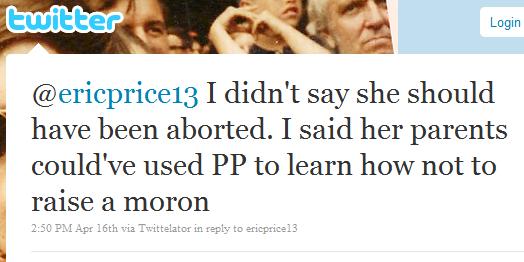 See? He didn’t wish S.E. Cupp out of existence, he just wanted her parents to get some parenting lessons. Aside from being a lie, this is arguably worse, since he’s now crapping all over her parents, who never did anything to him. Keith Olbermann, of all people, ought to appreciate the sanctity of the parental bond.

As if picking on S.E. Cupp in the first place wasn’t a weak enough move, and refusing to apologize for it (even though his non-factuality demonstrates consciousness of guilt) even weaker, Olbermann got worked into this “Are you Sarah Connor?”/Back to S.E. Cupp’s Future lather over a complete falsehood. Olbermann writes all over his Twitter feed, and his blog, that S.E. Cupp “lied” about Planned Parenthood in that appearance on the Joy Behar Show. Except she didn’t.

I’ve read the transcript Olbermann tweeted, and watched the video, and Cupp does no such thing. In fact, when Behar points out that Planned Parenthood does cervical cancer screenings, Cupp replies “You`re right. They do.”

The worst thing she says about Planned Parenthood, throughout the entire clip, is “I don`t believe in what they believe in. I don`t want to have to pay for it.”

By and large, she concedes almost every point Behar makes, and simply stands by her beliefs. What a horrible person.

It’s one thing to be wrong, but to stick by your beliefs. It’s not necessarily admirable, but it isn’t an indictment of one’s character. But to know that you’re wrong, and refuse to admit it (mostly because nobody has the nerve to make you admit it), that’s just cowardly, and it undermines whatever else you’re trying to say.

And from Keith Olbermann:

Say what you will, you have to give the guy props for a well-placed Pee Wee Herman homage. From TommyXtopher:

Clever. “I know Mediaite is, but what am I?” RT @KeithOlbermann: @jdmillikan dishonestly – that’s Cupp and Mediaite all right