Kellyanne Conway Dismisses Criticism of Her as ‘Gender-Based’
Opinion

Kellyanne Conway Dismisses Criticism of Her as ‘Gender-Based’ 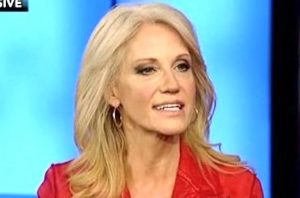 At a Saturday conservative summit, Kellyanne Conway used an interview as a platform to talk about the issue of gender. But Conway didn’t talk about women struggling to access reproductive rights or earn equal pay in the workplace — she talked about her misguided belief that all criticism of her is gender-based.

“I understand that we’re a nation of charged opinions and partisan rancor, but I do find that most of the vitriol comes from people who don’t know me, and who are very brave on social media,” Conway said in a response to a question from Bob Vander Plaats, president of social conservative group The Family Leader, at a conference in Des Moines, Iowa.

For her own part, Conway had the good grace to voice her appreciation that she and female Democratic senators “live in a nation where we all, particularly women, can disagree.”

But next, she went on to blast criticism directed toward her and President Donald Trump as “disconnected” from reality.

“It’s unbelievable how if I say something on a television program, or if the president says something, the reaction is so disconnected from what was just said,” she said.

“But so much of the criticism of me is so gender-based,” Conway added, while encouraging increased civility in policy debates. “I pray for my country and I pray for my critics.”

Conway’s remarks at Saturday’s Family Leadership Summit should alarm us all if for no other reason than that they make it painfully clear that, like Trump, she’s tuning out criticism and making her own spin on it without even listening. Criticism toward Conway far more often than not focuses on her tendency to go on live TV and spew out provably false “alternative facts” — she quite literally coined the term, herself.

From the notorious “Bowling Green massacre” to her insistence that women in the White House are respected by their president, it sometimes feels like Conway is incapable of uttering factually accurate statements.

It’s also worth noting that despite claiming to be a victim of sexism, herself, in so many ways, Conway perpetrates misogyny herself. For starters, there’s her work to elect a man with decades’ worth of sexual misconduct, abuse and even assault allegations, many made by women who were intimidated into silence and had no good motive to lie. And, of course, there’s her opposition to and smearing of organizations like Planned Parenthood, which provide less privileged women with crucial health care, and to safe, legal abortion services.

All in all, Conway is essentially no different from all other women working for President Trump — they work strictly for their own benefit, while turning a blind eye to far less privileged women, and only calling out sexism and “viciousness” in politics when they perceive it as directed at them.