Kimmel Responds to Jay Leno Saying He Has a ‘Mean Streak’

Kimmel Responds to Jay Leno Saying He Has a ‘Mean Streak’ 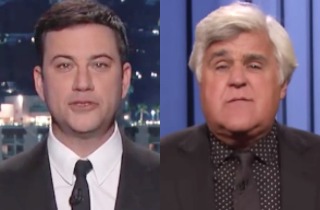 Jimmy Kimmel and Jay Leno have an interesting history. In the midst of the internal tensions at NBC that ended with Conan O’Brien leaving the network and a roughed-up Leno returning to The Tonight Show, Kimmel did a whole show pretending to be Leno in amazing mock fashion. Leno publicly took it in good fun and invited Kimmel on his then-primetime show to share a few laughs. But that spectacularly backfired when Kimmel spent a lot of his time ripping into Leno.

Well, this past August, when asked about the newer shakeups in late night, Leno said that Kimmel is funny but has a “mean streak,” which he thinks is a problem because kindness is an important late night quality.

And then earlier this month, Leno said this about Kimmel:

“He comes from radio… where you find some enemy and then you make up a phony battle. I never had any problems with the guy, but he chose to go after me. And that’s fine, welcome to show business.”

Well, Kimmel spoke to Vulture ahead of his week of shows in Brooklyn and this is what he had to say in response to Leno:

Jay Leno recently said that your comedy had a mean streak. What do you think about that?

Well, we know that Jay only does nice things for people — for his competitors. I can understand how he would feel that way. If there’s one thing he is, it’s nice 100 percent of the time.